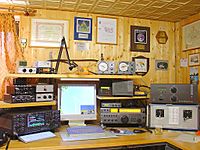 During a disaster or emergency, amateur radio can be used to get help. When telephones do not work, it may be the only way to communicate. Some radio hobbyists volunteer to listen to emergency band frequencies in case there are distress calls. If the volunteers hear a distress call, they notify the appropriate authorities (for example the police or the Coast Guard).

Amateur radio operators talk to each other in many ways. Some people talk with their voice, others use computers, television, or Morse code. They use many ways to get their signals to others. Most use shortwave radio signals that bounce off the sky. Some bounce off the moon or a satellite. Amateur radio operators have many ways to talk using the radio. Amateur radio satellites are called OSCAR's - Orbital Satellites Carrying Amateur Radio. Hams can also talk to astronauts and cosmonauts aboard the International Space Station (ISS). 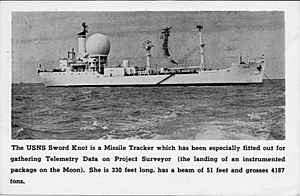 QSL Card from a ship

There are many ways to have fun with amateur radio. There are many games and contests. Amateur radio operators try to talk with as many others as possible. They then mail each other postcards called QSL cards to confirm the contact. Contesters may try to see how far they can talk, or to how many different people they can talk.

Some hide a transmitter which sends out a signal and others try to find it using receivers. This is called Radio direction finding, fox hunting or Radio sport. Sometimes the event is done with cars, or as a foot race.

All content from Kiddle encyclopedia articles (including the article images and facts) can be freely used under Attribution-ShareAlike license, unless stated otherwise. Cite this article:
Amateur radio Facts for Kids. Kiddle Encyclopedia.