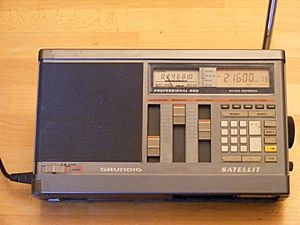 Shortwave radio is a name for radio waves in the range of 3-30 megahertz. Shortwave is often used for broadcasting, and radio receivers made to tune in those broadcasts are sometimes called shortwave radios. The earth's ionosphere carries radio waves in this range over great distances, and signals can travel around the globe under certain conditions. This makes it possible for radio stations all over the world to broadcast to listeners in faraway countries. Sunspot activity and solar flares can interfere with shortwave reception, and different frequencies work better at different times during the day or year.

Since their beginning in the early days of radio, shortwave stations have carried news and cultural information about the station's locality or country of origin. Many governments or national news agencies have shortwave stations, that broadcast in both English and their native languages, so they can inform both non-natives and natives about things in their country. Some broadcast in several different languages, to reach a wider listening audience. Some of these stations are Voice of America, BBC World Service, Deutsche Welle, and Voice of Russia.

Shortwave stations may also be run by private companies or groups. Some broadcast religious programming. HCJB and WEWN include actual church services in their programs. Others may broadcast weather or time information. WWV and WWVH give the current Coordinated Universal Time (UTC) at 2.500, 5.000, 10.000, and 15.000 megahertz. WWV is also on 20.000 megahertz.

A few stations are unlicensed, and their operators are called "pirates". Pirate stations may not broadcast regularly, or from the same location each time. They may carry music not played by other stations, and express unpopular opinions. Government authorities work to stop these stations, because they are not licensed and interfere with licensed ones.

Shortwave listenership has lessened with the rise of the Internet, but is still important to people worldwide, especially in areas the Internet and computer technology have not yet reached. Many longtime stations now stream their programming over the Internet, as audio feeds or podcasting, along with their radio broadcasts.

Two-way radio sets on ships and airplanes also use shortwaves to talk with ground stations that are far away, when they cannot use a communications satellite.

All content from Kiddle encyclopedia articles (including the article images and facts) can be freely used under Attribution-ShareAlike license, unless stated otherwise. Cite this article:
Shortwave radio Facts for Kids. Kiddle Encyclopedia.