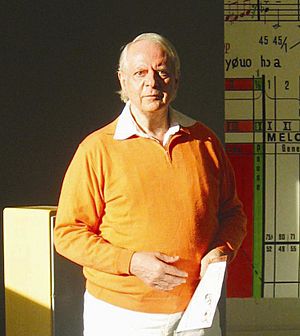 Karlheinz Stockhausen (22 August 1928-5 December 2007) was a German composer. He was the most important German composer in the years after World War II. During this time composers were exploring many new ideas. Stockhausen used serialism in new ways, and he invented many ways of composing electronic music. His works include an opera cycle Licht which consists of seven operas. 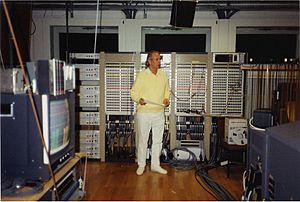 Karlheinz Stockhausen in the WDR Studio 1991

Stockhausen was born near Cologne. His father was a village school teacher. His mother was put in a sanatarium in 1933 where she died in 1942. She was probably killed there because the Nazis thought people who were mentally ill should not be allowed to live.

Stockhausen was a young man during the war. He trained to be a teacher and was sent to work in a military hospital near where the army was. His father died fighting in the war. After the war, with no parents, he went to work on a farm. Then, in 1947, he went to study at the Cologne Musikhochschule. He played the piano in bars and clubs and he improvised at the piano when playing for a magician’s magic shows. He was thinking of becoming a writer. 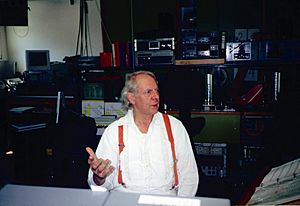 Karlheinz Stockhausen in the WDR studio in 1996

At this time many of Germany’s important composers met every summer in Darmstadt. The course was called Darmstadt Holiday Course for New Music. Stockhausen went there in 1951. There he performed some modern music and met important people such as the music critic and philosopher Theodor Adorno. He heard the music of Messiaen and, soon after marrying, he went to Paris to study with Messiaen He experimented with different sounds that percussion instruments can make, and he started composing electronic music. When he went back to Cologne he worked in a studio for electronic music where he studied communications theory. By this time Stockhausen, Boulez and Nono were the leading composers of avant garde (experimental) music.

Stockhausen made Cologne an important centre for electronic music. He also helped to make the Darmstadt Summer Courses a famous centre for modern music. 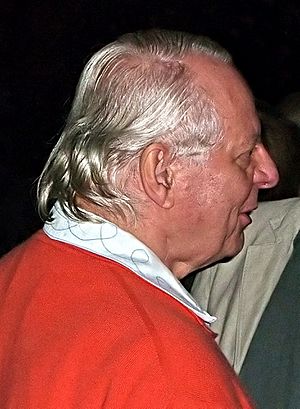 Stockhausen was by now world famous. He toured the United States and many other countries with a small group of musicians performing modern music. His music was not only listened to by fans of classical music but was also becoming part of popular youth culture. His picture was included on the front cover of the Beatles’s record Sgt. Pepper's Lonely Hearts Club Band. The record company Deutsche Grammophon sold more copies of his music than of any other modern composer except Stravinsky.

In some student works Stockhausen used twelve tone composition. He became interested in Messiaen and his composition Kreuzspiel shows Messiaen’s influence. In Kontra-Punkte (1953) the music starts with very small bits played by ten instruments. Gradually these little bits come together and at the end the music concentrates on the piano.

From 1953 he worked seriously at electronic music. He thought that electronic music was going to be the music of the future. He continued to experiment with new ideas. He composed “live electronic” music beginning in the 1960s. This means using electronics to change the sound of normal instruments that are amplified. 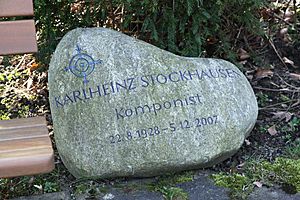 Karlheinz Stockhausen's grave at the Waldfriedhof in Kürten

Stockhausen died of sudden heart failure on the morning of 5 December 2007 in Kürten, North Rhine-Westphalia. Just the night before, he had finished a work (then recently commissioned) for performance by the Mozart Orchestra of Bologna. He was 79 years old.

All content from Kiddle encyclopedia articles (including the article images and facts) can be freely used under Attribution-ShareAlike license, unless stated otherwise. Cite this article:
Karlheinz Stockhausen Facts for Kids. Kiddle Encyclopedia.