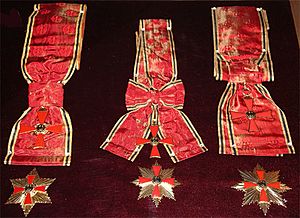 The Bundesverdienstkreuz (Federal Cross of Merit) is Germany's only general decoration (award). It is officially called the Verdienstorden der Bundesrepublik Deutschland (Order of Merit of the Federal Republic of Germany). This Federal Order of Merit was created on 7 September 1951. Germany gives between 3,000 and 5,200 awards every year, in all classes.

Most of the Länder have their own orders of merit. There are up to three ranks (member, officer, commander). The Cities of Bremen and Hamburg do not have an order, and by old tradition its citizens will refuse any decoration in form of an order.

The Bundesverdienstkreuz has eight classes, in ascending order:

Except for the lowest class, the badge is the same for all classes. However, the badge and ribbon for women is a little smaller. The badge is a golden Maltese Cross enamelled in red. It has a central disc with a black eagle. The star is golden. It has straight rays and its size and points vary according to class. The badge is on top of it. The ribbon is red with gold-black-gold stripes.

All content from Kiddle encyclopedia articles (including the article images and facts) can be freely used under Attribution-ShareAlike license, unless stated otherwise. Cite this article:
Bundesverdienstkreuz Facts for Kids. Kiddle Encyclopedia.