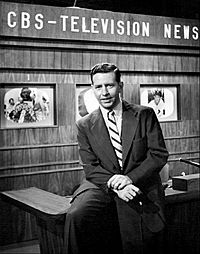 The CBS Evening News is a daily evening newscast on CBS. It is the "flagship" program of the CBS News division. The program began in 1948 as "Douglas Edwards with the News." They were sponsored by General Motors. In 1963 the name was changed to the "CBS Evening News". It is currently anchored by Scott Pelley. He became the anchor and managing editor of CBS Evening News in 2011.

All content from Kiddle encyclopedia articles (including the article images and facts) can be freely used under Attribution-ShareAlike license, unless stated otherwise. Cite this article:
CBS Evening News Facts for Kids. Kiddle Encyclopedia.