Katherine Anne Couric (born January 7, 1957) is an American journalist and author. She recently served as Yahoo! Global News Anchor. Couric has been a television host on all Big Three television networks in the United States, and in her early career was an Assignment Editor for CNN. She worked for NBC News from 1989 to 2006, CBS News from 2006 to 2011, and ABC News from 2011 to 2014.

In addition to her television news roles, she hosted Katie, a syndicated daytime talk show produced by Disney–ABC Domestic Television from September 10, 2012, to June 9, 2014. Some of her most important notable roles include co-host of Today, anchor of the CBS Evening News, and correspondent for 60 Minutes. She also reported for nearly every television news broadcast across ABC, CBS and NBC.

Couric's 2011 book, The Best Advice I Ever Got: Lessons from Extraordinary Lives, was a New York Times best-seller. In 2004, Couric earned induction into the Television Hall of Fame. Couric was dubbed "America's Sweetheart" largely due to her co-anchor role for 15 years on The Today Show. 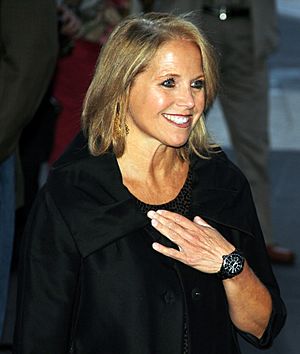 Katie Couric was born in Arlington, Virginia, the daughter of Elinor Tullie (née Hene), a homemaker and part-time writer, and John Martin Couric, a public relations executive and news editor at The Atlanta Journal-Constitution and the United Press in Washington, D.C.

Couric attended Arlington Public Schools: Jamestown Elementary, Williamsburg Middle School, and Yorktown High School and was a cheerleader. As a high school student, she was an intern at Washington, D.C. all-news radio station WAVA. She enrolled at the University of Virginia in 1975 and was a Delta Delta Delta sorority sister.

Couric served in several positions at UVA's award-winning daily newspaper, The Cavalier Daily. During her fourth year at UVA, Couric was chosen to live as Senior Resident (SR) of The Lawn, the heart of Thomas Jefferson's Academical Village. She graduated in 1979 with a bachelor's degree in American Studies. 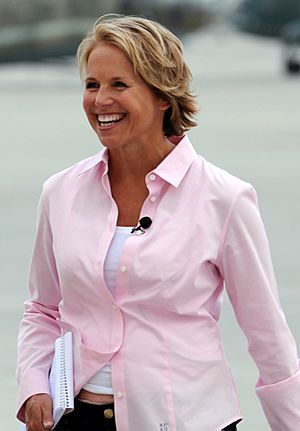 Couric's first job in 1979 was at the ABC News bureau in Washington, D.C., later joining CNN as an assignment editor. Between 1984 and 1986, she worked as a general-assignment reporter for the then-CBS affiliate WTVJ in Miami, Florida. During the following two years, she reported for WRC-TV, the NBC owned- and -operated station in Washington, D.C., work which earned her an Associated Press award and an Emmy.

In a media crossover to animated film, Couric was the voice of news-reporter "Katie Current" in the US version of the film Shark Tale. She has also made cameo appearances in Austin Powers in Goldmember (as a Georgia State Prison guard) and an episode of General Hospital. She guest-starred as herself on the CBS sitcom Murphy Brown in 1992 and in the NBC sitcom Will & Grace in late 2002, and made a cameo appearance on a Pawn Stars episode. 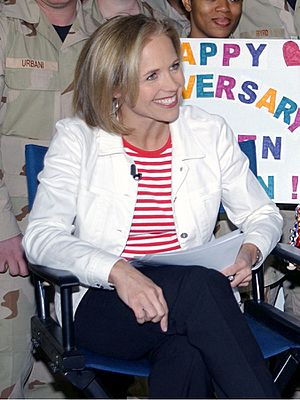 On May 12, 2003, she traded places for a day with Tonight Show host Jay Leno. Couric also co-hosted NBC's live coverage of Macy's Thanksgiving Day Parade from 1991 until 2005. On May 16, 2010, Couric received an honorary doctor of science degree for her efforts in raising awareness of colorectal cancer and for her commitment to advancing medical research from Case Western Reserve University, and later gave the university's 2010 convocation keynote address.

In 2011, she gave the university commencement speech at Boston University and was awarded another doctoral degree, Doctor of Humane Letters. She has also hosted a Sesame Street special, "When Families Grieve". The special, which aired on PBS on April 14, 2010, dealt with the issues that children go through when a parent dies. On February 6, 2011, Couric guest-starred on the post-Super Bowl episode of Glee, playing herself. 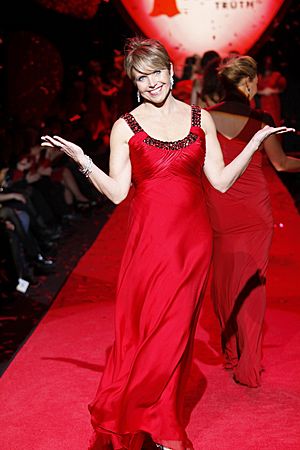 Couric's third book, The Best Advice I Ever Got: Lessons from Extraordinary Lives, was published by Random House in 2011. The book is a collection of essays compiled over the past year by Couric; contributors include New York City Mayor Michael Bloomberg, Queen Rania of Jordan, and former Today Show colleague Matt Lauer. Couric said that a 2010 convocation keynote address she gave inspired her to write the book. To this end, all profits of the book will be donated to Scholarship America. 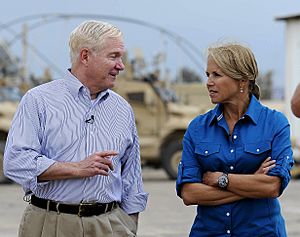 Couric married attorney John Paul "Jay" Monahan in 1989. She gave birth to their first daughter in 1991; their second daughter in 1996. Her husband died of colon cancer in 1998 at the age of 42. Couric then became a spokeswoman for colon cancer awareness.

She also was very active in the National Hockey League's Hockey Fights Cancer campaign, appearing in some public service announcements and doing voice-overs for several others. 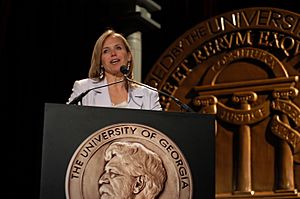 Couric was the honored guest at the 2004 Multiple Myeloma Research Foundation fall gala. As the Guest of Honor for the inaugural American Cancer Society Discovery Ball, Couric was recognized for her leadership in increasing cancer awareness and screening. In 2011, Couric became the Honorary National Chair of the National Parkinson Foundation's Moving Day campaign, a grassroots campaign to spotlight Parkinson's disease awareness on a national level.

In September 2013, she became engaged to financier John Molner after a two-year relationship. Couric married Molner in a small, private ceremony at her home in The Hamptons on June 21, 2014. The two star in the online cooking series Full Plate with Katie & John.

All content from Kiddle encyclopedia articles (including the article images and facts) can be freely used under Attribution-ShareAlike license, unless stated otherwise. Cite this article:
Katie Couric Facts for Kids. Kiddle Encyclopedia.