Walter Leland Cronkite, Jr. (November 4, 1916 - July 17, 2009) was an American news reporter. He was the anchor of CBS News from 1962 to 1981. Important events he reported included when President John F. Kennedy was assassinated. He reported the Apollo 11 moon landing. He also reported on the Watergate scandal, which led to President Richard Nixon resigning from his position. He was often called "the most trusted man in America." People across the country tuned in nightly to hear his coverage of the Vietnam War as it progressed.

Cronkite was born on November 4, 1916, in Saint Joseph, Missouri, the son of Helen Lena (née Fritsche) and Dr. Walter Leland Cronkite, a dentist.

He attended college at the University of Texas at Austin (UT), entering in the Fall term of 1933, where he worked on the Daily Texan and became a member of the Nu chapter of the Chi Phi Fraternity. He also was a member of the Houston chapter of DeMolay, a Masonic fraternal organization for boys. While attending UT, Cronkite had his first taste of performance, appearing in a play with fellow student Eli Wallach. He dropped out in 1935, not returning for the Fall term, in order to concentrate on journalism.

In 1935 he left school to work for the Houston Post. He later worked for several midwestern radio stations. In World War II he was a war correspondent for United Press International. After the war he was chief correspondent at the Nuremberg trials. He went to work for CBS News in 1950. In 1962 he helped start the CBS Evening News. He served as the news anchor until he retired in 1981.

After retiring, in 1981 he was a co-producer of a PBS program, Why in the World. In 1982 he hosted CBS's Universe. He was the host of A&E's Dinosaur. He did Cronkite Remembers for CBS and the Discovery Channel. He also wrote several books. He won several awards during his career. In 1981 he was awarded the Presidential Medal of Freedom. He won two Peabody Awards and several Emmy Awards.

Cronkite was known for his coverage of the U.S. space program, from Project Mercury to the Moon landings to the Space Shuttle. He was the only non-NASA recipient of a Moon-rock award. Cronkite was well known for his departing catchphrase "And that's the way it is," followed by the date on which the appearance aired.

Cronkite made history when he became the first television reporter to announce the assassination of John F. Kennedy. In the newsroom at CBS, the cameras were not ready when the news came in over the wire service. Cronkite's voice was broadcast over a blank CBS placard on the screen: "Bulletin . . . In Dallas, Texas, three shots were fired at President Kennedy's motorcade. The first reports say the President was seriously wounded, that he slumped over in Mrs. Kennedy's lap, she cried out, 'Oh, no!' and the motorcade went on . . . The wounds perhaps could be fatal . . ." For three and a half days there was no entertainment, no commercials, just the news.

Cronkite's reporting of Vietnam was controversial. He reported the events on the evening news. But at the Tet Offensive he traveled there to see the results. What he saw upset him. On February 27, 1968, Cronkite reported the war in Vietnam could not be won. This was a major change from his usual objective reporting. He was voicing his own opinion on national television. It was the view of David Halberstam and others that Cronkite's broadcast turned many Americans against the war. Also that it played a part in Lyndon B. Johnson's decision not to run for another term as President. The other viewpoint is that Americans had already turned against the war before Cronkite's broadcast. After watching Cronkite's broadcast, Lyndon Johnson said to his press secretary, George Christian, "If I have lost Walter Cronkite, I’ve lost Middle America." Whatever effect Cronkite's broadcast had, by 1967 Johnson's approval rating on the war was down to 32%. 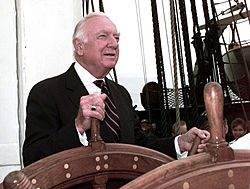 Cronkite at the helm of the USS Constitution in July 1997.

Cronkite was married for nearly 65 years to Mary Elizabeth 'Betsy' Maxwell Cronkite, from March 30, 1940, until her death from cancer on March 15, 2005. They had three children: Nancy Cronkite, Mary Kathleen (Kathy) Cronkite, and Walter Leland (Chip) Cronkite III (who is married to actress Deborah Rush). Cronkite dated singer Joanna Simon from 2005 to 2009.

Cronkite was reported to be a fan of the game Diplomacy, which was rumored to be Henry Kissinger's favorite game.

In June 2009, Cronkite was reported to be terminally ill. He died on July 17, 2009, at his home in New York City aged 92. He is believed to have died from cerebrovascular disease. Cronkite's funeral took place on July 23, 2009, at St. Bartholomew's Church in midtown Manhattan, New York City. Among many journalists who attended were, Tom Brokaw, Connie Chung, Katie Couric, Charles Gibson, Matt Lauer, Dan Rather, Andy Rooney, Morley Safer, Diane Sawyer, Bob Schieffer, Meredith Vieira, Barbara Walters, and Brian Williams. At his funeral, his friends noted his love of music, including, recently, drumming. He was cremated and his remains buried next to his wife, Betsy, in the family plot in Kansas City.

All content from Kiddle encyclopedia articles (including the article images and facts) can be freely used under Attribution-ShareAlike license, unless stated otherwise. Cite this article:
Walter Cronkite Facts for Kids. Kiddle Encyclopedia.