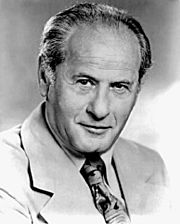 Wallach in a publicity photo in 1966

Eli Herschel Wallach (December 7, 1915 – June 24, 2014) was an American movie, television, voice, and stage actor who gained fame during the late 1950s. For his performance as Silva Vacarro in Baby Doll, he won a BAFTA Award for Best Newcomer, an Honorary Academy Award, an Emmy Award, a Tony Award, and a Golden Globe Award nomination.

Wallach was born on December 7, 1915 in Red Hook, Brooklyn, New York and studied at the University of Texas at Austin, City College of New York, and at the Neighborhood Playhouse School of Theatre.

Wallach's famous roles are Tuco in The Good, the Bad and the Ugly, Calvera in The Magnificent Seven, and as Mr. Freeze in Batman. Other roles includes; Don Altobello in The Godfather Part III, Cotton Weinberger in The Two Jakes, and Arthur Abbott in The Holiday. He is still an active actor even in his nineties and being in films as in Wall Street: Money Never Sleeps and in The Ghost Writer.

Wallach was married to Anne Jackson since 1948. They had three children. His great nephew was movie critic A. O. Scott. Wallach lived in East Hampton, New York.

Wallach, during a set of a movie he was in, accidentally drank from a bottle of acid that a technician had carelessly placed next to his soda bottle. He spat it out quickly, but was angry because his vocal cords could have been damaged if he had swallowed any of it.

All content from Kiddle encyclopedia articles (including the article images and facts) can be freely used under Attribution-ShareAlike license, unless stated otherwise. Cite this article:
Eli Wallach Facts for Kids. Kiddle Encyclopedia.