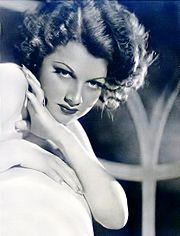 Sheridan was born Clara Lou Sheridan on February 21, 1915 in Denton, Texas. She studied at the University of North Texas.

Sheridan died on January 21, 1967 in Los Angeles, California from esophageal cancer and liver cancer, aged 51. She is buried at the Hollywood Forever Cemetery.

All content from Kiddle encyclopedia articles (including the article images and facts) can be freely used under Attribution-ShareAlike license, unless stated otherwise. Cite this article:
Ann Sheridan Facts for Kids. Kiddle Encyclopedia.