Denton is a city in and the county seat of Denton County, Texas. As of the 2010 United States Census, its population was 113,383, making it the 27th most populous city in Texas and the 12th-largest city in the Dallas–Fort Worth metroplex.

A Texas land grant led to the formation of Denton County in 1846, and the city was incorporated in 1866. Both were named after pioneer and Texas militia captain John B. Denton. The arrival of a railroad line in the city in 1881 spurred population, and the establishment of the University of North Texas in 1890 and Texas Woman's University in 1901 distinguished the city from neighboring regions. After the construction of Dallas/Fort Worth International Airport finished in 1974, the city saw more rapid growth; as of 2011, Denton was the seventh fastest-growing city with a population over 100,000 in the country.

Located on the north end of the Dallas–Fort Worth metroplex in North Texas on Interstate 35, Denton is known for its active music life; the North Texas State Fair and Rodeo, Denton Arts and Jazz Festival, and 35 Denton Music Festival attract over 300,000 people to the city each year. The city experiences hot, humid summers and relatively few extreme weather events. Its diverse citizenry is represented by a nonpartisan city council, and numerous county and state departments have offices in the city. With over 45,000 students enrolled at the two universities located within its city limits, Denton is often characterized as a college town. As a result of the universities' growth, educational services play a large role in the city's economy. Residents are served by the Denton County Transportation Authority, which provides commuter rail and bus service to the area. 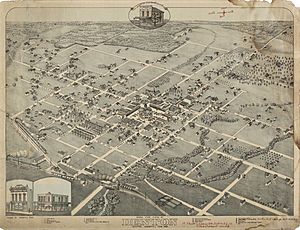 The formation of Denton is closely tied with that of Denton County. White settlement of the area began in the middle of the 1800s when William S. Peters of Kentucky obtained a land grant from the Texas Congress and named it Peters Colony. After initial settlement in the southeast part of the county in 1843, the Texas Legislature voted to form Denton County in 1846. Both the county and the town were named for John B. Denton, a preacher and lawyer who was killed in 1841 during a skirmish with Kichai people in what is now Tarrant County. Pickneyville and Alton were selected as the county seat before Denton was named for that position in 1857. That year, a commission laid out the city and named the first streets.

Denton incorporated in 1866; its first mayor was J.B. Sawyer. As the city expanded, it became an agricultural trade center for the mill and cottage industries. The arrival of the Texas and Pacific Railway in 1881 gave Denton its first rail connection and brought an influx of people to the area. North Texas Normal College, now the University of North Texas, was established in 1890, and the Girls' Industrial College, now Texas Woman's University, was founded in 1903. As the universities increased in size, their impact on Denton's economy and culture increased.

Denton grew rapidly from a population of 26,844 in 1960 to 48,063 in 1980. Its connection to the Dallas-Fort Worth metroplex via I-35E and I-35W played a major role in the growth, and the opening of Dallas/Fort Worth International Airport in 1974 led to an increase in population. In the 1980s, heavy manufacturing companies like Victor Equipment Company and Peterbilt joined older manufacturing firms such as Moore Business Forms and Morrison Milling Company in Denton. The population jumped from 66,270 in 1990 to 80,537 in 2000. In May 2006, Houston-based real estate company United Equities purchased the 100-block of Fry Street and announced that several of the historic buildings would be demolished to accommodate a new mixed-use commercial center. The proposal drew opposition from some residents, who sought to preserve the area as a historic and cultural icon for the city. The Denton City Council approved a new proposal for the area from Dinerstein Cos in 2010.

Denton is located on the northern edge of the Dallas–Fort Worth metropolitan area. These three cities form the area known as the "Golden Triangle of North Texas." According to the United States Census Bureau, the city has a total area of 89.316 square miles (231.33 km2), of which 87.952 square miles (227.79 km2) is land and 1.364 square miles (3.53 km2) is water. The city lies in the northeast edge of the Bend Arch–Fort Worth Basin, which is characterized by flat terrain. Elevation ranges from 500 to 900 feet (150 to 270 m). Part of the city is located atop the Barnett Shale, a geological formation believed to contain large quantities of natural gas. Lewisville Lake, a man-made reservoir, is located 15 miles (24 km) south of the city.

With its hot, humid summers and cool winters, Denton's climate is characterized as humid subtropical and is within USDA hardiness zone 8a. The city's all-time high temperature is 113 °F (45 °C), recorded in 1954. Dry winds affect the area in the summer and can bring temperatures of over 100 °F (38 °C), although the average summer temperature highs range from 91 to 96 °F (33 to 36 °C) between June and August. The all-time recorded low is −3 °F (−19 °C), and the coolest month is January, with daily low temperatures averaging 33 °F (1 °C). Denton lies on the southern end of what is commonly referred to as "Tornado Alley"; the National Weather Service occasionally issues tornado watches, although tornadoes rarely form in the city. The city receives approximately 37.7 inches (96 cm) of rain per year. Flash floods and severe thunderstorms are frequent occurrences during spring months. Average snowfall in Denton is similar to the Dallas–Fort Worth average of 2.4 inches (6.1 cm) per year.

Denton is home to several annual artistic and cultural events that cater to residents and tourists. The annual North Texas State Fair and Rodeo began in 1928 and promotes the cowboy culture of Texas. In addition to a rodeo, the event features several local country rock performances, pageants, and food contests. Hosted by the North Texas State Fairgrounds since 1948, the fair brings in over 150,000 people during its nine-day run. The Denton Municipal Airport has hosted the annual Denton Airshow since 1998. The event includes aerial demonstrations and airplane exhibits; it attracted over 10,000 attendees in 2012. Other events in the city include an annual Redbud Festival, the Fiesta on the Square, and the Thin Line Documentary Film Fest.

The local independent music scene in Denton has emerged alongside Denton's academic music establishments, including the University of North Texas College of Music. The city's live music venues are largely supported by Denton's college town atmosphere, although show attendance is bolstered by area residents. The Dallas Observer features a column on Denton's local music scene. In 2007 and 2008, Denton's music scene received feature attention from The Guardian, Pop Matters, and The New York Times. Paste Magazine named Denton's music scene the best in the United States in 2008. The city-sponsored Denton Arts and Jazz Festival attracts over 200,000 people each year for live music, food, crafts, and recreation at Civic Center Park. Bands such as Tower of Power, Brave Combo, and Arturo Sandoval have performed at the festival, as well as jazz groups from the University of North Texas. With hopes of creating a live music event similar to South by Southwest, Denton held the first annual North by 35 Music Festival, now called 35 Denton, in March 2009. In 2014 the Huffington Post listed Denton as the number one emerging cultural hot spot in Texas to visit while referring to Denton as "Practically an indie band factory at this point..." 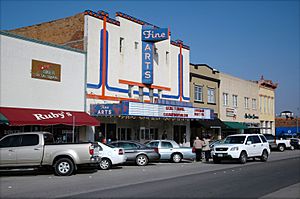 The Denton Square, bordered by Oak, Hickory, Locust, and Elm Streets, is a cultural and political hub of the city. At its center is the Denton County Courthouse-on-the-Square, which includes local government offices and a museum showcasing area history and culture. Listed on the U.S. National Register of Historic Places, the former county courthouse was restored for the Texas Sesquicentennial in 1986. The positive response to the renovation sparked a downtown revitalization program that generated new jobs and reinvestment capital. The downtown square is populated by local shops and restaurants, some of which have been in business since the 1940s. Each year, the downtown square is adorned with lights and spotlighted during the Denton Holiday Lighting Festival.

The Confederate Soldier Monument, a 12 feet (3.7 m) tall granite monument consisting of an arch topped by a statue of a Confederate soldier, was erected in 1918 in Denton Square on the courthouse lawn by the Daughters of the Confederacy. The monument is controversial, and unsuccessful attempts to have it removed have been made. 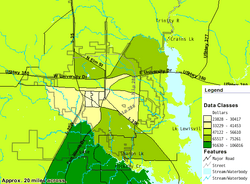 Map of median family income in Denton County in 1999 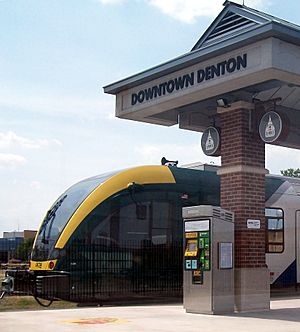 I-35E and I-35W, which split in Hillsboro south of the Metroplex and come north through Dallas and Fort Worth respectively, rejoin near the University of North Texas campus in the southwest part of Denton to form Interstate 35 as it continues north on its way to Oklahoma. Loop 288 partially encircles the city; it passes through the northern limits of the city by C. H. Collins Athletic Complex and the eastern side near Golden Triangle Mall. Highway 77 and 377 go through the historic town square and Highway 380 connects Denton to Frisco and McKinney in the east and Decatur in the west. Denton Municipal Airport is a public airport located 3 miles (4.8 km) west of the central business district (CBD) of Denton. This airport serves as home to various cargo and charter operators as well as two flight schools. A new terminal opened in 2008, but as of June 2008 no scheduled commuter service is in place.

Denton is served by the Denton County Transportation Authority (DCTA), which operates express bus service to downtown Dallas and Lewisville. In 2011, Downtown Denton Transit Center and Medpark Station opened as commuter rail stations on DCTA's A-train, which now has five stations and connects to the Green Line of Dallas Area Rapid Transit's (DART) Green Line at Trinity Mills Station. The two transit companies, along with the Trinity Rail Express (TRE) of Fort Worth, offer regional passes to be used on any of the three systems. DCTA also operates local bus service within the city and special university shuttles. Special Programs for Aging Needs (SPAN), a non-profit organization, offers paratransit service for senior citizens and people with disabilities of all ages.

In response to a 2014 city referendum prohibiting hydraulic fracturing (fracking) that passed with 59% of the vote, Texas enacted a law specifying "the exclusive jurisdiction of this state to regulate oil and gas operations in this state and the express preemption of local regulation of those operations", though it allows some "commercially reasonable" rules. Denton says it will "continue to enforce our current regulations to protect the health and safety of our residents, but we do not know how the operators or courts will react".

All content from Kiddle encyclopedia articles (including the article images and facts) can be freely used under Attribution-ShareAlike license, unless stated otherwise. Cite this article:
Denton, Texas Facts for Kids. Kiddle Encyclopedia.