Dallas–Fort Worth metroplex facts for kids

The Dallas–Fort Worth–Arlington, TX Metropolitan Statistical Area, the official title designated by the United States Office of Management and Budget, encompasses 13 counties within the U.S. state of Texas. Residents of the area refer to it as the Dallas/Fort Worth Metroplex, DFW, or The Metroplex. It is the economic and cultural hub of the region commonly called North Texas or North Central Texas and is the largest inland metropolitan area in the United States.

A portmanteau of metropolis and complex, the term metroplex is credited to Harve Chapman, an executive vice president with Dallas-based Tracy-Locke which was one of three advertising agencies that worked with the North Texas Commission (NTC) on strategies to market the region. The NTC copyrighted the term "Southwest Metroplex" in 1972 as a replacement for the previously-ubiquitous "North Texas", which studies had shown lacked identifiability outside the state. In fact, only 38 percent of a survey group identified Dallas and Fort Worth as part of "North Texas", with the Texas Panhandle also a perceived correct answer, being the northernmost region of Texas. 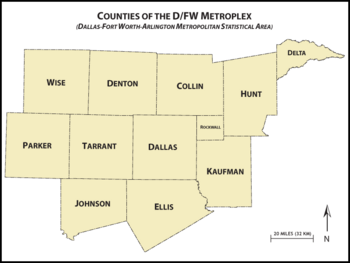 Counties in the DFW metroplex (picture is now outdated) 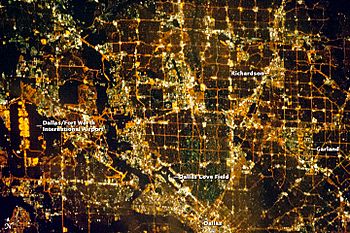 Places designated "principal cities" by the Office of Management and Budget (OMB) are italicized.

Places with fewer than 10,000 inhabitants

Main page: Demographics of Dallas-Fort Worth

The Metroplex overlooks mostly prairie land with a few rolling hills dotted by man-made lakes cut by streams, creeks and rivers surrounded by forest land. The Metroplex is situated in the Texas blackland prairies region, so named for its fertile black soil found especially in the rural areas of Collin, Dallas, Ellis, Hunt, Kaufman, and Rockwall counties.

Many areas of Denton, Johnson, Parker, Tarrant, and Wise counties are located in the Fort Worth Prairie region of North Texas, which has less fertile and more rocky soil than that of the Texas blackland prairie; most of the rural land on the Fort Worth Prairie is ranch land. A large onshore natural gas field, the Barnett Shale, lies underneath this area; Denton, Tarrant and Wise counties feature many natural gas wells. Continuing land use change results in scattered crop fields surrounded by residential or commercial development.

South of Dallas and Fort Worth is a line of rugged hills that goes north to south about 15 miles (24 km) that looks similar to the Texas Hill Country 200 miles (320 km) to the south. 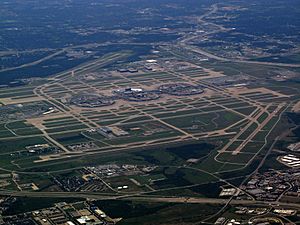 Love Field Airport (IATA airport code: DAL) is located on the northwest side of the city of Dallas. Southwest Airlines is based in Dallas next to Love Field. 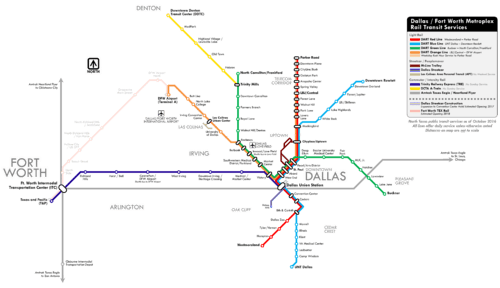 Diagram of public rail transit in the Dallas/Fort Worth area

Public transit options continue to expand significantly, however, it is limited in several outlying and rural suburbs. Dallas County and parts of Collin and Rockwall counties have bus service and light rail operated by Dallas Area Rapid Transit (DART), covering thirteen member cities. With the completion of projects under construction, DART's rail network will grow beyond 93 miles of track by 2016. The Red Line extends north to Plano and southwest to Westmoreland Road. The Blue Line reaches from Rowlett in the northeast to Ledbetter Road in south Dallas (with an additional 3 miles south to the University of North Texas at Dallas campus near I-20 scheduled to open in 2016). The 28-mile Green Line, which opened in December 2010, connects Carrollton in the northwest through Downtown Dallas to Pleasant Grove in the southeast. The Orange Line, which completed expansion in 2014, parallels the Red Line from Plano to Downtown Dallas and the Green Line from Downtown Dallas to Northwest Hwy extending through Las Colinas (Irving) to reach DFW International Airport.

Denton County has bus service limited to Denton, Highland Village, and Lewisville (with commuter service to downtown Dallas) provided by the Denton County Transportation Authority (DCTA). The A-train, a diesel commuter rail line, parallels I-35E to connect Denton, Highland Village, Lewisville, and Carrollton. Several smaller towns along this line, Corinth, Shady Shores, and Lake Dallas, voted to abstain from DCTA and do not have stations. There is an across-the-platform transfer in Carrollton to the DART Green Line. A-Train service began June 20, 2011.

Tarrant County has bus service operated by the Fort Worth Transportation Authority (known as 'The T'), available only in Fort Worth. The diesel commuter train that serves Fort Worth and its eastern suburbs is operated as the Trinity Railway Express; it connects downtown Fort Worth to downtown Dallas, where it links to the DART light rail system. A station near its midpoint, Centerport, serves DFW Airport via a free airport shuttle bus. The TRE is jointly owned by FWTA and DART. Amtrak serves Dallas and Fort Worth once daily in each direction on a route from Chicago to Austin to San Antonio, with connections at San Antonio to New Orleans, Houston, El Paso, Phoenix, and Los Angeles.

The Dallas-Fort Worth area has thousands of lane-miles of freeways and interstates. The Metroplex has the second-largest number of freeway-miles per capita in the nation, behind only the Kansas City Metropolitan Area. As in most major metropolitan areas in Texas, most interstates and freeways have access or frontage roads where most of the businesses are located; these access roads have slip ramps allowing traffic to transition between the freeway and access road. North-south interstates include I-35 and I-45. East-west routes include I-30 and I-20. I-35 splits into I-35E and I-35W from Denton to Hillsboro: I-35W goes through Fort Worth while I-35E goes through Dallas. (This is one of only two examples of an interstate splitting off into branches and then rejoining as one; the other such split is in Minneapolis-St. Paul where I-35E goes into St. Paul and I-35W goes through Minneapolis.) I-30 connects Dallas and Fort Worth, and I-45 connects Dallas to Houston. The "multiple-of-5" numbers used for the interstate designations are notable, as these numbers were designed to be used for major multi-state arteries of the U.S. Interstate Highway System. The North Texas region is the terminus for two of them, and I-45 is located only within Texas.

HOV lanes exist along I-35E, I-30, I-635, US 67, and US 75. I-20 bypasses both Dallas and Fort Worth to the south while its loop, I-820, goes around Fort Worth. I-635 splits to the north of I-20 and loops around east and north Dallas, ending at SH 121 north of DFW Airport. I-35E, Loop 12, and Spur 408 ultimately connect to I-20 southwest of Dallas, completing the west bypass loop around Dallas. A large number of construction projects are planned or are already underway in the region to alleviate congestion. Due largely to funding issues, many of the new projects involve building new tollways or adding tolled express lanes to existing highways, which are managed by the North Texas Tollway Authority. It was originally established to manage the Dallas North Tollway and oversees several other toll projects in the area.

As of 2016 the Taiwanese airline EVA Air operates a shuttle bus service from George Bush Intercontinental Airport in Houston to Richardson, so that Dallas-based customers may fly on its services to and from Houston.

All content from Kiddle encyclopedia articles (including the article images and facts) can be freely used under Attribution-ShareAlike license, unless stated otherwise. Cite this article:
Dallas–Fort Worth metroplex Facts for Kids. Kiddle Encyclopedia.