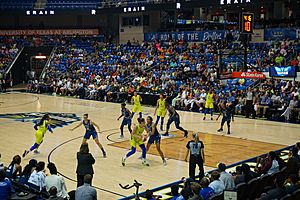 The 2019 Wings in action against Minnesota

The Dallas Wings are an American basketball team based in Arlington, Texas. The Wings play in the Western Conference in the Women's National Basketball Association (WNBA). The team is owned by a group which is led by Chairman Bill Cameron. Greg Bibb is President and CEO. Brad Hilsabeck joined the Dallas Wings ownership group in March 2019 with the acquisition of Mark Yancey’s interest in the Wings.

The team was founded in Auburn Hills, Michigan, before the 1998 WNBA season began and moved to Tulsa, Oklahoma, before the 2010 season; on July 20, 2015, Cameron announced that the franchise would move to Arlington for the 2016 WNBA season.

All content from Kiddle encyclopedia articles (including the article images and facts) can be freely used under Attribution-ShareAlike license, unless stated otherwise. Cite this article:
Dallas Wings Facts for Kids. Kiddle Encyclopedia.