Auburn Hills is a city in Oakland County in the U.S. state of Michigan. The population was 21,412 at the 2010 census. Before incorporating as a city in 1983, the area was part of the now-defunct Pontiac Township. It is home to Oakland University and the U.S. headquarters of Stellantis, BorgWarner, Chrysler, and Volkswagen.

In 1908, automobile pioneer John Dodge bought a farmhouse 3 miles (4.8 km) northeast of Auburn Heights to use as his country retreat. His oldest child, Winifred Dodge, married real estate baron Wesson Seyburn, who built his own country retreat 2.5 miles (4.0 km) north of Auburn Heights. The estate included hunting land, dog kennels, a swimming pool, horse stables, and a 5,000-square-foot (460 m2) Colonial Revival house. Pontiac Township purchased the estate in 1976, and adapted the buildings for government use. Today, it is known as the Auburn Hills Civic Center.

The first use of the name "Auburn Hills," in 1964, was by Oakland Community College. They named their campus (a former Nike missile base) at Featherstone and Squirrel roads for the town and the hilly terrain in the area. Besides Oakland Community College, three other colleges, Oakland University, Baker College, and Western Michigan University Thomas M. Cooley Law School have campuses partially within the city limits.

Auburn Hills began as Pontiac Township, including the village of Auburn, in 1821, at what is today the corner of Auburn and Squirrel roads. Situated on the Clinton River, it was named by Aaron Webster, the first settler, for Auburn, New York. His sawmill and grist mill attracted settlers to Auburn. After the streets were laid out in 1826, Auburn rivaled nearby Pontiac until the 1860s, when it lost its prosperity. The town was renamed Amy in 1880, and it officially became Auburn Heights in 1919. Pontiac Township bordered the city of Pontiac on two sides. The township attempted to incorporate as Pontiac Heights in 1971, but was denied by state officials. Pontiac Township became a charter township in 1978, to protect itself from further annexation. In 1983, Pontiac Township merged with the village of Auburn Heights to become the City of Auburn Hills. It is not to be confused with the similarly named city of Auburn, Michigan, that exists in Bay County, near Saginaw Bay.

There were 8,844 households, of which 27.0% had children under the age of 18 living with them, 38.8% were married couples living together, 12.4% had a female householder with no husband present, 4.5% had a male householder with no wife present, and 44.3% were non-families. 33.5% of all households were made up of individuals, and 7.3% had someone living alone who was 65 years of age or older. The average household size was 2.24 and the average family size was 2.90.

Auburn Hills is home to several local parks, many of which are open year-round.

A skateboard, inline skate and BMX bike park open to all ages and skill levels. The use of the facility is always free and it remains open from April to November, 8 a.m. until dusk.

Popular hiking and walking attraction with numerous nature trails. A fishing pond and picnic area are also available for public use. The park offers open lawn areas and a picnic shelter with a fireplace inside. The park features a softball field, 9-hole disc golf course, tennis courts, two play structures, and swings. 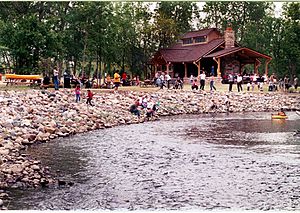 An expansive, 16-mile (26 km) walkway through the heart of Oakland County. The trail cuts through several different cities, including Rochester, Rochester Hills, Sylvan Lake, Auburn Hills, and Pontiac. The 2.1-mile (3.4 km) section of trail within Auburn Hills is covered in finely crushed stone, ideal for walking, jogging and biking.

Featuring a fireman-themed “tot-lot” for children ages 2–5, Dennis Dearing Jr. Memorial Park is a popular spot for families with children. The park also has swings, picnic tables and open space areas for picnic or play.

Eighty acres of woods, meadows and marsh are accessible via several groomed nature trails and a boardwalk. This year-round facility features heated restroom and shower facilities for the winter months, along with a two-story lodge with six overnight camping cabins. The lodge can be rented for meetings or activities year-round.

A two-acre park which contains a play structure, sand volleyball courts, a paved play area and open space for activities.

Located adjacent to downtown Auburn Hills and along the Clinton River, Riverside Park is a popular spot during the warmer months. A canoe launch is open during the warm season.

Located near downtown Auburn Hills, this park has picnic areas, both open and sheltered, standing barbecue grills and heated restrooms which remain open year-round. Visitors can navigate through the park on a paved pathway system, which includes a bridge over the Clinton River. The park also contains four basketball courts and play structures. 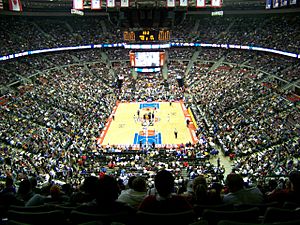 The Palace of Auburn Hills

Auburn Hills roughly follows the course of Interstate 75 and is home to a prosperous business community. In the early 1980s, Oakland University partnered with developers to create a technology and research park. The Oakland Technology Park was approved by the city in 1985, with Comerica, EDS, and Chrysler to build campuses there. The city's many tech and office buildings host 80,000 people during the workday.

In 2002, the area at Auburn and Squirrel was revitalized as the "Village Center" with streetscape improvements. Pedestrian-friendly development is encouraged in this district now known simply as Downtown Auburn Hills. At the end of 2013, a number of large projects were completed Downtown, including a four-story graduate student apartment complex, a 233-space parking deck, an auxiliary classroom space for schools and colleges called the University Center and the Downtown Educational Nook (DEN), a refurbished historic log cabin acting as a student and community center.

In 2017, Maserati announced it was moving its U.S. headquarters from Englewood Cliffs, New Jersey to the former Walter P. Chrysler Museum in Auburn Hills. 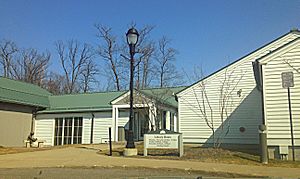 Private schools in Auburn Hills include:

All content from Kiddle encyclopedia articles (including the article images and facts) can be freely used under Attribution-ShareAlike license, unless stated otherwise. Cite this article:
Auburn Hills, Michigan Facts for Kids. Kiddle Encyclopedia.