Rochester is a city on the northern outskirts of Metro Detroit, in northeast Oakland County, in the U.S. state of Michigan. The population was 12,711 at the 2010 census. The area is locally known for its active downtown, high-end shopping and dining, rolling hills and large homes.

The city has the following neighborhoods: 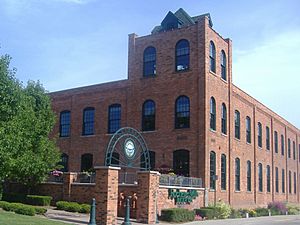 The Western Knitting Mills, built in 1896, was owned by the Chapman brothers.

The first settlers in what would become Rochester, the Graham family, built a log cabin in 1817. The cabin was located where the Quik Pik and Penn Station stores today exist at the intersection of Main and Second Street. The city was named for Rochester, New York, just like Rochester, Minnesota, as many early settlers to the area were formerly from the state of New York.

The city became an industrial center with abundant water power from the Clinton River and Paint Creek. The interconnected waterways are no longer used for travel or local industry, but provide natural beauty, some fishing, and a healthy portion of the Clinton Watershed. Historically, past industries formerly located in Rochester included a refinery for sugar beets, a paper products company, and the Western Knitting Mills factory, which was later adapted and utilized during World War II for incendiary production—businesses that no longer exist in the area. Rochester was served by two railroads as well as the Detroit United Railway, an interurban to Royal Oak and Detroit.

Chapman Mill Pond, east of downtown, disappeared into the Paint Creek when the dam broke during the flood of 1946. The reclaimed land is the site of the current post office, Rochester Hills library, and Olde Towne Road. Water Street, formerly situated at the edge of the large pond, remains by its name a reminder of the pond's former existence.

According to the United States Census Bureau, the city has a total area of 3.83 square miles (9.92 km2), all land. Since an annexation of a section of Avon Township (now Rochester Hills), the city has an eastern boundary that extends to the border with Macomb County.

The city has held the annual "Rochester Hometown Christmas Parade" since 1951. Held on the first Sunday in December, it features over 100 units. It claims to be Michigan's largest Christmas parade.

In 2006, the city had its first "Big Bright Light Show" for the Christmas season. The downtown businesses were covered in 500,000 individual lights. An expansion of the program after its initial inception expanded that coverage to a reported one million lights. It was also aired by WXYZ-TV. 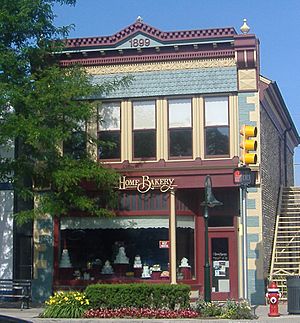 Established in 1817, Rochester was one of Oakland County’s first settlements. Twenty-two buildings on Main Street are more than 50 years old, and several are on the State Register of Historic Places. 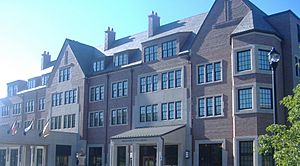 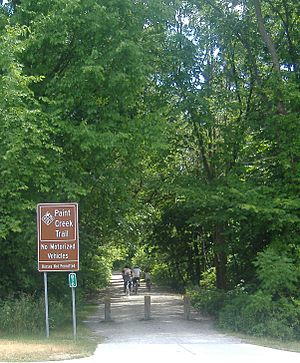 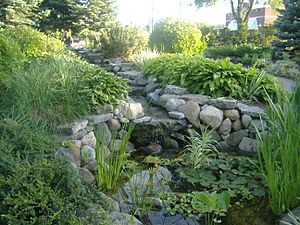 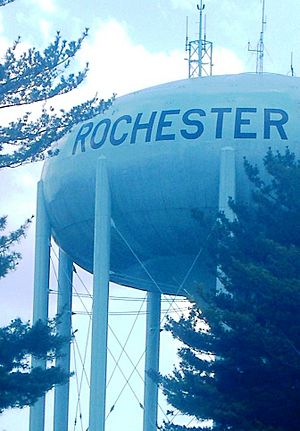 There were 5,514 households of which 30.9% had children under the age of 18 living with them, 47.3% were married couples living together, 7.7% had a female householder with no husband present, 2.9% had a male householder with no wife present, and 42.1% were non-families. 35.5% of all households were made up of individuals and 8.8% had someone living alone who was 65 years of age or older. The average household size was 2.31 and the average family size was 3.09.

All content from Kiddle encyclopedia articles (including the article images and facts) can be freely used under Attribution-ShareAlike license, unless stated otherwise. Cite this article:
Rochester, Michigan Facts for Kids. Kiddle Encyclopedia.