Jason Andrew Varitek (born April 11, 1972), nicknamed "Tek", is a retired American baseball catcher. After being traded as a minor league prospect by the Seattle Mariners, Varitek played his entire career in Major League Baseball (MLB) for the Boston Red Sox, for whom he now works as a special assistant. A three-time All-Star and Gold Glove Award winner at catcher, as well as a Silver Slugger Award winner, Varitek was part of both the 2004 World Series and 2007 World Series Championship teams, and was viewed widely as one of the team's leaders. In December 2004 he was named the captain of the Red Sox, only their fourth captain since 1923. He was a switch-hitter.

Varitek is one of only three players, along with pitcher Ed Vosberg and outfielder Michael Conforto, to have played in the Little League World Series, College World Series, and Major League World Series. He additionally participated in Olympic Baseball and the World Baseball Classic. His Lake Brantley High School baseball team won the Florida State Championship his senior year in 1990 and was named the number one high school baseball team in the nation by a USA Today poll. Varitek caught an MLB-record four no-hitters, a record which was later tied by Carlos Ruiz. 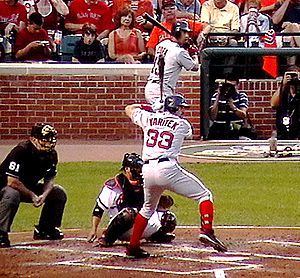 Varitek played in the 1984 Little League World Series, leading his Altamonte Springs, Florida team to victory in the United States Championship bracket in a 4–2 victory over Southport, Indiana.

Jason was Lake Brantley High School's third baseman and relief catcher. Brantley's first line catcher was Jerry Thurston, himself a pro prospect. In 1990, the Patriots won the state championship. He was also a member of the 1992 U.S. Olympic team and won the Dick Howser Trophy for National Collegiate Player of the Year.

Varitek was drafted in the 23rd round of the 1990 amateur draft by the Houston Astros, but opted to attend college instead of pursuing professional baseball at that time.

Varitek attended Georgia Tech, where he helped lead the Yellow Jackets baseball team to the 1994 College World Series title game, along with teammates Nomar Garciaparra and Jay Payton (they would lose to the University of Oklahoma). He was also named Baseball America's 1993 College Player of the Year. Varitek graduated from Georgia Tech with a degree in management and is the only Tech baseball player to have his number (33) retired. 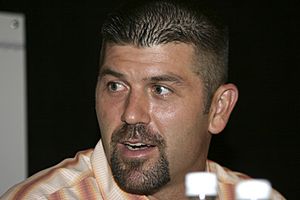 On September 27, 2012, Red Sox General Manager Ben Cherington announced that Varitek had been named special assistant to the general manager. In that role, Cherington said Varitek would be involved in areas such as "major league personnel decisions, evaluations, and mentorship and instruction of young players." Varitek is currently a special assistant to Dave Dombrowski, president of baseball operations.

All content from Kiddle encyclopedia articles (including the article images and facts) can be freely used under Attribution-ShareAlike license, unless stated otherwise. Cite this article:
Jason Varitek Facts for Kids. Kiddle Encyclopedia.