The regular season is played from May to September, with the "All Star" game being played midway through the season in July (except in Olympic years) and the WNBA Finals at the end of September until the beginning of October. Starting in 2020, a midseason tournament, the Commissioner's Cup, will be added. Initially, regular-season Cup games were to be played through early July, followed by a final match in August; however, this schedule is subject to change due to disruptions from the COVID-19 pandemic.

Five WNBA teams have direct NBA counterparts and play in the same arena: Indiana Fever, Los Angeles Sparks, Minnesota Lynx, New York Liberty, and Phoenix Mercury. The Atlanta Dream, Chicago Sky, Connecticut Sun, Dallas Wings, Las Vegas Aces, Seattle Storm, and Washington Mystics do not share an arena with a direct NBA counterpart, although four of the seven (the Dream, the Sky, the Wings, and the Mystics) share a market with an NBA counterpart, and the Storm shared an arena and market with an NBA team at the time of its founding. The Dream, the Sky, the Sun, the Wings, the Aces, the Sparks, and the Storm are all independently owned. 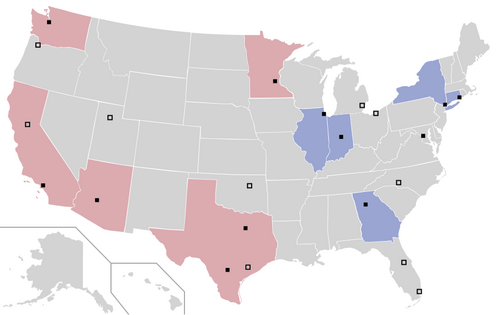 The WNBA originated with 8 teams in 1997, and through a sequence of expansions, contractions, and relocations currently consist of 12 teams. There have been a total of 18 franchises in WNBA history.

As of the league's most recent 2019 season, the Las Vegas Aces (formerly the Utah Starzz and San Antonio (Silver) Stars), Los Angeles Sparks, New York Liberty, and Phoenix Mercury are the only remaining franchises that were founded in 1997.

Arenas listed below reflect those that had been intended for use in the 2020 season before COVID-19 led to an abbreviated season played entirely at the IMG Academy in Bradenton, Florida.

All content from Kiddle encyclopedia articles (including the article images and facts) can be freely used under Attribution-ShareAlike license, unless stated otherwise. Cite this article:
Women's National Basketball Association Facts for Kids. Kiddle Encyclopedia.