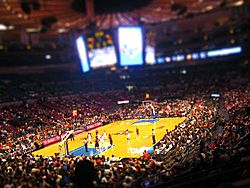 The New York Liberty is an American professional basketball team based in the New York metropolitan area, playing in the Eastern Conference in the Women's National Basketball Association (WNBA). The team was founded in 1997 and is one of the eight original franchises of the league. The team is owned by Joe Tsai, the majority owner of the Brooklyn Nets. The team's home games are played at Barclays Center in Brooklyn, New York.

The Liberty have qualified for the WNBA Playoffs in fourteen of its twenty-four years. The franchise has been home to many well-known players such as Teresa Weatherspoon, Rebecca Lobo, Becky Hammon, Leilani Mitchell, Essence Carson, Cappie Pondexter, and Tina Charles. Through the 2016 season, the Liberty have four conference championships and have played in the WNBA Finals four times, falling to the Houston Comets in 1997, 1999, and 2000, and losing to the Los Angeles Sparks in 2002. They have the most appearances in the WNBA Finals without a championship.

All content from Kiddle encyclopedia articles (including the article images and facts) can be freely used under Attribution-ShareAlike license, unless stated otherwise. Cite this article:
New York Liberty Facts for Kids. Kiddle Encyclopedia.