White Plains is a city in Westchester County, New York, United States. It is the county seat and commercial hub of Westchester, an affluent suburban county just north of New York City that is home to almost one million people. White Plains is located in south-central Westchester, with its downtown (Mamaroneck Avenue) 25 miles (40 km) north of Midtown Manhattan.

As of 2013, the city's total population was estimated to be 57,866, up from 56,853 at the 2010 census. According to the city government, the daytime weekday population is estimated at 250,000. The city was ranked third in the top 10 places to live in New York for 2014, according to national online real estate brokerage Movoto.

At the time of the Dutch settlement of Manhattan in the early 17th century, the region had been used as farmland by the Weckquaeskeck tribe, members of the Mohican nation and was called "Quarropas". To early traders it was known as "the White Plains", either from the groves of white balsam which are said to have covered it, or from the heavy mist that local tradition suggests hovered over the swamplands near the Bronx River. The first non-native settlement came in November 1683, when a party of Connecticut Puritans moved westward from an earlier settlement in Rye and bought about 4,400 acres (18 km2), presumably from the Weckquaeskeck. However, John Richbell of Mamaroneck claimed to have earlier title to much of the territory through his purchase of a far larger plot extending 20 miles (32 km) inland, perhaps from a different tribe. The matter wasn't settled until 1721, when a Royal Patent for White Plains was granted by King George II.

In 1758, White Plains became the seat of Westchester County when the colonial government for the county left West Chester, which was located in what is now the northern part of the borough of the Bronx, in New York City. The unincorporated village remained part of the Town of Rye until 1788, when the town of White Plains was created.

On July 9, 1776, a copy of the Declaration of Independence was delivered to the New York Provincial Congress, which was meeting in the county courthouse. The delegates quickly adopted a resolution approving the Declaration, thus declaring both the colony's independence and the formation of the State of New York. The Declaration itself was first publicly read from the steps of the courthouse on July 11.

During September and October 1776, troops led by George Washington took up positions in the hills of the village, hotly pursued by the British under General Sir William Howe, who attacked on October 28. The Battle of White Plains took place primarily on Chatterton Hill, (later known as "Battle Hill," and located just west of what was then a swamp but is now the downtown area) and the Bronx River. Howe's force of 4,000–6,000 British and Hessian soldiers required three attacks before the Continentals, numbering about 1,600 under the command of Generals Alexander McDougall and Israel Putnam, retreated, joining Washington's main force, which did not take part in the battle. Howe's forces had suffered 250 casualties, a severe loss, and he made no attempt to pursue the Continentals, whose casualties were about 125 dead and wounded. Three days after the battle Washington withdrew north of the village, this was then occupied by Howe's forces. But after several inconclusive skirmishes over the next week Howe withdrew on November 5, leaving White Plains to the Continentals. Ironically, one of Washington's subordinates, Major John Austin, who was probably drunk after having celebrated the enemy's withdrawal, reentered the village with his detachment and proceeded to burn it down. Although he was court-martialed and convicted for this action, he escaped punishment. 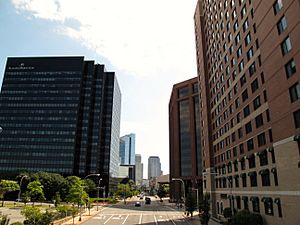 Early in the 20th century, White Plains' downtown area developed into a dominant suburban shopping district and featured branch stores of many famous New York-based department and specialty stores. Some of these retail locations were the first large-scale suburban stores built in the United States, and ushered in the eventual post-World War II building boom.

During the late 1960s, the city of White Plains developed an extensive urban renewal plan for residential, commercial and mixed-use redevelopment that effectively called for the demolition of its entire central business district from the Bronx River Parkway east to Mamaroneck Avenue. By 1978, the urban renewal program centered around the construction of the Westchester County Courthouse (1974), the Westchester One office building (1975), the Galleria at White Plains mall (1978), and a number of other office towers, retail centers and smaller commercial buildings.

At the time of its construction, the Westchester One building was the largest office building between New York City and Albany, and east to Hartford.

Beginning in the 1950s, many major corporations based in New York City relocated operations to White Plains and other suburban locations. These included General Foods, PepsiCo, Hitachi USA, IBM, Nestlé, Snapple and Heineken USA. At the height of the 1980s, at least 50 Fortune 500 corporations called Westchester County and nearby Fairfield County, CT, home, but with the corporate mergers and downsizing of the 1990s many of these companies either reduced their operations in White Plains or left the area completely. 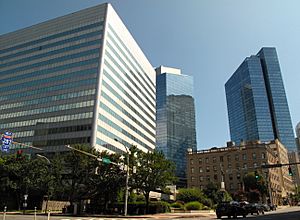 White Plains is also home to the Arts Exchange Building, which serves as the headquarters of the Westchester Arts Council. Since March 1999, visual and performing artists, emerging cultural organizations and new creative businesses have studios and offices in the building. It is listed on the National Register of Historic Places.

The construction of the Galleria at White Plains mall in the 1970s ushered in a new era of downtown retail and office development, but by the early 1990s, economic development had stagnated, hampered by a deep recession and the overbuilding of the commercial real estate markets. For a time, White Plains had the dubious distinction of having one of the highest office vacancy rates in the northeast. Consolidation within the retail industry led to the closing of many of downtown's original department and specialty stores as well. After its bankruptcy, the B. Altman store closed in 1989 and was eventually demolished to make way for the massive upscale retail mall, The Westchester, which opened in 1995 with anchors Nordstrom and Neiman Marcus. A freestanding branch of Macy's, one of downtown's original retail anchor stores, was relocated two blocks away to The Galleria mall by its parent company, Federated Department Stores, replacing the location of sister retailer, Abraham & Straus when these two store divisions were merged in 1995. 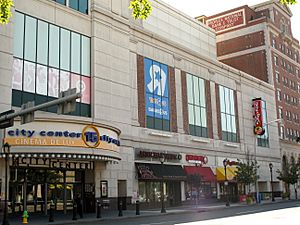 In early 2002, the Saks Fifth Avenue location was also closed and demolished; it was replaced in 2004 with the large retail complex called The Source at White Plains, featuring the upscale restaurants Morton's of Chicago, The Cheesecake Factory, and the gourmet supermarket chain Whole Foods Markets. Note: As of July 20, 2009, the Fortunoff and Mayrock families re-acquired the Fortunoff brand and intellectual property; all Fortunoff stores are currently closed.

Other major projects were completed in the late 1990s and early 2000s that have further altered the urban character of downtown White Plains. A new courthouse for the Southern District of New York was opened in 1998 and several large-scale office properties in and near downtown, including the former General Foods headquarters building, were retrofitted and leased to accommodate smaller businesses. The Macy's store on Main Street remained vacant for several years until it was also later demolished to make way for the massive City Center at White Plains complex. This large mixed-use development features two 35-story apartment and condominium towers, 600,000-square-foot (60,000 m2) of retail, restaurant and entertainment space and new parking facilities. Aside from the Arts Exchange building (which used to be a bank), another bank next to the City Center was renovated to become Zanaro's, a family-style Italian restaurant. In 2010, Zanaros closed and was replaced by Buffalo Wild Wings. City Center's opening in 2003 marked the beginning of a new downtown development renaissance, and with the improving economy and healthy office leasing activity, White Plains entered the new millennium as the leading retail and office center in Westchester County.

In 2007, construction was completed on Renaissance Square, a downtown parcel that includes the luxury Ritz-Carlton hotel.

Beginning in 2000, the city's permanent population experienced a growth spurt as additional apartment buildings were constructed. The city's close commuting distance to midtown Manhattan (31 minutes by express train) have also attracted a lot of people who commute to New York City for work. However, in large part because of its proximity to New York City, the cost of living in White Plains, although lower than that of New York City itself, is by some measures among the highest in the world.

White Plains is bordered to the north by the town of North Castle, to the north and east by the town/village of Harrison, to the south by the town/village of Scarsdale, and to the west by the town of Greenburgh. The city is about 7 miles (11 km) east of the Hudson River and 7 miles (11 km) northwest of the Long Island Sound. According to the U.S. Census Bureau, White Plains has a land area of 9.77 square miles (25.3 km2), and a population density of 5,820.3 inhabitants per square mile (2,247.2/km2).

White Plains has a humid continental climate, with four distinct seasons. Winter is cold and moderately snowy, with an average January temperature of 29.1 °F (−1.6 °C), and summer is warm and humid, with a mean July temperature of 73.5 °F (23.1 °C). In spring and fall, temperatures can fluctuate widely, but are usually mild and comfortable. Precipitation is plentiful and evenly spread out through the year, with measurable rain and/or snow falling on just under one-third of days. The city receives approximately 234 clear or partly cloudy days per annum, with October typically being the sunniest month, averaging more than 70 percent of possible sunshine. White Plains is within USDA hardiness zone 7a.

Several popular films and TV series have been filmed in White Plains, including The Departed and Across The Universe. White Plains was also selected as the original filming destination for Larry Charles' Borat, but Sacha Baron Cohen insisted the film be shot in New York City instead.

The White Plains Performing Arts Center, which can seat up to 410 people, serves as a venue for a variety of events, such as Broadway theatre and concerts.

The White Plains Farmers' Market operates year-round in the city, setting up Downtown at 255 Main Street from May to November, and in the Westchester County Center the rest of the year. In addition to the various food products sold, there is often also live music at the Market.

Westchester County Center is home to the Westchester Knicks of the National Basketball Association Development League. They began play in the 2014-2015 season. 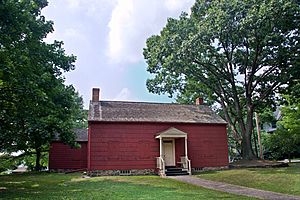 All content from Kiddle encyclopedia articles (including the article images and facts) can be freely used under Attribution-ShareAlike license, unless stated otherwise. Cite this article:
White Plains, New York Facts for Kids. Kiddle Encyclopedia.