The town of Rye consists of two discontiguous portions. The City of Rye separates the village of Mamaroneck (to the southwest) from the villages of Port Chester and Rye Brook (to the north and northeast). Rye Town is not to be mistaken with Rye City. 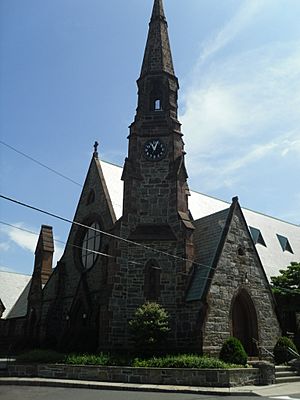 The town of Rye has its original roots on Manursing Island. On June 29, 1660, three settlers living in "Grenege" (now known as Greenwich, Connecticut), Thomas Studwell, John Coe, and Peter Disbrow, purchased Manursing Island (called Menussing by the Indians) from the Mohegan Indians. A tract of land lying between the Byram River and Blind Brook was sold by the Indians to Peter Disbrow on May 22, 1661. That year the four men were joined by John Budd, an original settler of Long Island (Southold) and, previously, New Haven. The four men bought additional lands from the Indians on June 2, 1662. The four men are regarded as the founders of Rye. Another settler, John Horton, purchased some additional lands. By 1662, the town of Hastings had 12 proprietors: Thomas Studwell, John Brondig, William Odell, Thomas Applebe, Philip Galpin, Richard Fowler, William Odell, Peter Disbrow, John Coe, Samuel Allen, Thomas Studwell and John Budd. A neighboring town named Hastings was merged into Rye in the 1660s, no later than 1666, as a 1666 sale of house by John Budd to a George Kniffen of Stratford for 37 pounds, ten shillings, was noted as having been conducted "by agreement of the men of Hastings, now called Rye."

Connecticut and New York both claimed the area, but in these early days, the colonists considered themselves to be under the protection of Connecticut. Connecticut formally ceded Rye to New York in 1683 as part of a boundary agreement, cementing the Connecticut Panhandle.

John Budd, who in 1663 was selected by the colonists to be its representative to the government of Connecticut, had purchased a large portion of land west of Blind Brook, an area called Apawquammis by the Indians, for the sum of eighty pounds sterling on November 8, 1661, one of three major land purchases by Budd from the Indians in the area that month. In 1666, Budd purchased yet another large parcel. By this time, other colonists had grown concerned at the size of Budd's holdings, and Budd's willingness to "settle people upon it", which they regarded as "extreamely prejuditial to the towne" of Rye. On October 2, 1668, nine inhabitants of Rye, apparently led by Peter Disbrow, petitioned the governor in Hartford to force Budd to sell some of his holdings to them. The petition failed, and Budd continued selling tracts to new settlers, as did his descendants. One such sale, in 1745, of 150 acres (0.61 km2) was from another John Budd, a grandson of the founder, to Peter Jay, father of John Jay, subsequently the president of the Continental Congress, co-author with Alexander Hamilton and James Madison of The Federalist Papers, and Chief Justice of the United States, among other major distinctions.

The town grew and developed Poningo Neck, the current business district of the city of Rye, and finally the Saw Pit area, known today as Port Chester. Original roads, including the Post Road, King Street, and Grace Church Street, are some of the oldest roads, then carriage paths, that led residents in and out of the area.

The Rye Town Park-Bathing Complex and Oakland Beach was added to the National Register of Historic Places in 2003.

All content from Kiddle encyclopedia articles (including the article images and facts) can be freely used under Attribution-ShareAlike license, unless stated otherwise. Cite this article:
Rye (town), New York Facts for Kids. Kiddle Encyclopedia.