Kids Encyclopedia Facts
For the locality in England, see Portchester. 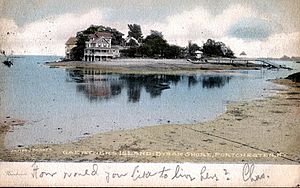 Port Chester (locally pronounced PORT-chester is a village in Westchester County, New York, United States. The village is part of the town of Rye. As of the 2010 census, Port Chester had a population of 28,967. The village name is pronounced with the same syllable stress pattern as that of the county which contains it, i.e., "PORT ches-ter", not "Port CHES-ter".

See also: The History of the Town of Rye

In 1660, three settlers from Greenwidge (now Greenwich, Connecticut), Thomas Studwell, John Coe, and Peter Disbrow, arranged to buy Manursing Island and the land near the Byram River from the Mohegan Indians. The land that they bought is now Port Chester. The village was originally known as Saw Pit for the saw pits which were in use during the time. Logs were cut in holes in the ground for wood to be used for shipbuilding. The name of Sawpit was used for the first time in 1732. The village eventually outgrew this name and became Port Chester by incorporating as a village in 1868. When Port Chester was first incorporated, it was considered a major seaport.

In 1665, Sawpit was claimed by both New York and Connecticut. However, the land was given back to the New York Colony by Connecticut in 1683. This struggle over the ownership of Sawpit continued for almost 105 years. In 1788, the Legislature of New York ruled that Sawpit was a part of the town of Rye in New York.

Travel was considered dangerous in the early years of Sawpit as good roads were hard to find. The Boston Post Road, King Street, and Grace Church streets are some of the early migration paths in the Sawpit/Rye settlement. Other roads were usually dirt, which made transportation via water important.

The local waterways, the Byram River and Long Island Sound, were a key part of the growth and development of Sawpit/Port Chester. Early residents took part in boat building, farming, and shell fishing.

There were 9,240 households out of which 33.9% had children under the age of 18 living with them, 46.5% were headed by married couples living together, 14.3% had a female householder with no husband present, and 31.3% were non-families. 24.2% of all households were made up of individuals and 10.0% had someone living alone who was 65 years of age or older. The average household size was 3.08 and the average family size was 3.54.

Port Chester contains a more diverse, working-class population than many of its surrounding communities.

Port Chester has a transitional climate between a humid subtropical climate (Cfa) and a humid continental climate, although in reality it shares far more features with the latter. Due to its location on the coast, temperatures don't get extremely cold or warm and precipitation is plentiful for the entire year. Winters are usually cold and powerful nor'easters are common, often dropping over 2 feet of snow on the city. Average annual snowfall is 38.6 inches, which is significantly more than New York City. Snow cover while typically not persistent for the entire winter is present much of the time, sometimes during all of January and February. During the summer, Port Chester is typically warm, however is far cooler than towns even a few miles inland.

The Bee-Line Bus System provides bus service to Port Chester on routes 13 and 61.

Connecticut Transit Stamford Division provides bus service to Port Chester on routes 11A and 11B. The 13 was combined with the southern portion of the 76 on December 31, 2011.

The Port Chester-Rye Brook Public Library is an association library funded by and for the villages of Port Chester and Rye Brook. The library was founded in 1876 by the Honorable Jared V. Peck and was dedicated at its present location in 1926 at the intersection of Haseco and Westchester Avenues. Three major renovations have taken place over the years: 1967, 2007 and 2012. The latest renovation included the creation of a teen room, a multipurpose meeting room, the addition of new furniture and carpets, and the relocation of the children's room and the implementation of an elevator. Although the renovation did not add square footage to the original three-story, 18,900 square foot building, it did provide a more open design with better use of space and light to promote parent and child reading activities. The 2012 renovations which cost $1M dollars were paid with the kind bequest of the late Douglas and Elise Lefferts. According to 2011 records; 19,900 people hold library cards, and 10,221 people attended programs including GED and community interest classes. The summer reading program typically draws 13,000 children

On June 30, 1974 an infamous nightclub fire killed 24 young men and women. The fire at Gulliver's was the deadliest dance club fire in the United States in more than a generation (the Cocoanut Grove fire in Boston, on November 28, 1942, had killed 491, and the Happy Land fire in the Bronx, on March 25, 1990, was to kill 87), and it called attention to the dangers of herding young people into windowless underground rooms without smoke alarms, sprinklers, fire-resistant walls, or limits on occupancy.

Despite the tragedy of Gulliver's, comprehensive New York State Fire Code reform would not be seen until the 1980s. Fire code enforcement continues to be a top priority in Port Chester to this day.

Port Chester is twinned with:

All content from Kiddle encyclopedia articles (including the article images and facts) can be freely used under Attribution-ShareAlike license, unless stated otherwise. Cite this article:
Port Chester, New York Facts for Kids. Kiddle Encyclopedia.