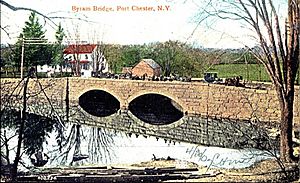 The Byram River is a river approximately 13.9 miles (22.4 km) in length, in southeast New York and southwestern Connecticut in the United States.

The river has an elevation of 750 feet (230 m) at its headwaters at Byram Lake in Westchester County, New York, and flows in a southward direction, crossing the New York-Connecticut border and eventually reaching sea level at Port Chester Harbor, where it empties into the Long Island Sound. The lower portion of the river is paralleled by the Merritt Parkway in Connecticut and eventually forms the southernmost portion of the New York-Connecticut border.

There are several dams on the river which are controlled by the Town of Greenwich.

Several bridges cross the river. As of the summer of 2007, three of the bridges in northwest Greenwich had been identified by state inspectors as in critical need of repair, and all were scheduled for work:

The Byram River was once a center of economic activity where shipbuilding and fishing were major industries. The Byram section of Greenwich is at the southern end of the river, on the Connecticut side.

On April 15, 2007, a nor'easter flooded areas near the river on both the Connecticut and New York sides. In July 2007, Greenwich town officials gave initial approval for spending $250,000 to study drainage improvement in flood-prone areas near the river, including the idea of dredging the river.

All content from Kiddle encyclopedia articles (including the article images and facts) can be freely used under Attribution-ShareAlike license, unless stated otherwise. Cite this article:
Byram River Facts for Kids. Kiddle Encyclopedia.