Byram is a neighborhood/section and census-designated place (CDP) in the town of Greenwich in Fairfield County, Connecticut, United States. It had a population of 4,146 at the 2010 census, and a census-estimated population of 4,216 in 2018. An endcap of Connecticut's Gold Coast, Byram is the southernmost point in the town of Greenwich and the U.S. state of Connecticut. It is separated from Port Chester, Westchester County, New York, by the Byram River. Byram was once known as East Port Chester. 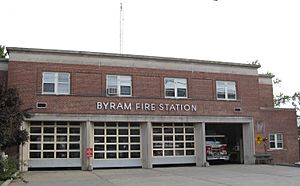 Byram Quarry, now closed, supplied stone for the Brooklyn Bridge, the base of the Statue of Liberty and St. Roch Church.

A scene from the movie The Good Shepherd was shot in Byram.

Byram has three sites on the National Register of Historic Places:

All content from Kiddle encyclopedia articles (including the article images and facts) can be freely used under Attribution-ShareAlike license, unless stated otherwise. Cite this article:
Byram, Connecticut Facts for Kids. Kiddle Encyclopedia.