Greater Bridgeport is part of the Bridgeport-Stamford-Norwalk-Danbury metropolitan statistical area, which consists of all of Fairfield County. The estimated 2015 county population was 948,053.

The smallest official definition of Greater Bridgeport is the area under the authority of the Greater Bridgeport Regional Planning Agency, which oversees transportation, land use and economic development planning for its member towns. The region consists of the six towns indicated in the introduction. 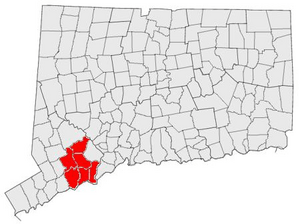 Towns of the Greater Bridgeport region

The Bridgeport Labor Market Area includes the core region above and also extends northeast into Milford and the Lower Naugatuck Valley (including Ansonia, Beacon Falls, Derby, Oxford, Seymour, and Shelton) for a total of 13 towns.

The urbanized areas of Stamford and Bridgeport are contiguous and considered by the U.S. Census Bureau as a single urban core. The towns containing this merged urbanized area, plus surrounding towns with significant commuter interchange to the central towns, are grouped together as the Bridgeport-Stamford-Norwalk New England City and Town Area. The area contains 25 towns and includes the Greater Bridgeport Region, the Gold Coast, the Lower Naugatuck Valley, and the additional outlying towns of Milford, Newtown, Redding, Ridgefield, Southbury, and Woodbridge. As of the 2000 census, the population of the NECTA was 892,283

A slightly smaller definition known as the Southwest Service Delivery Area consists of the Greater Bridgeport Region, the Lower Naugatuck Valley (including Oxford), the Gold Coast, and the town of Milford (20 towns).

The MSA associated with Bridgeport is the Bridgeport-Stamford-Norwalk MSA and consists of the entirety of Fairfield County with 23 towns. While statistically similar in terms of population and extent to the NECTA definition, the MSA includes the city of Danbury and its suburbs, and excludes the Valley region.

All content from Kiddle encyclopedia articles (including the article images and facts) can be freely used under Attribution-ShareAlike license, unless stated otherwise. Cite this article:
Greater Bridgeport Facts for Kids. Kiddle Encyclopedia.