Shelton is a city in Fairfield County, Connecticut, United States. The population was 39,559 at the 2010 census.

Shelton was settled by the English as part of the town of Stratford, Connecticut, in 1639. On May 15, 1656, the Court of the Colony of Connecticut in Hartford affirmed that the town of Stratford included all of the territory 12 miles (19 km) inland from Long Island Sound, between the Housatonic River and the Fairfield town line. In 1662, Stratford selectmen Lt. Joseph Judson, Captain Joseph Hawley and John Minor had secured all the written deeds of transfer from the Golden Hill Paugussett Indian Nation for this vast territory that comprises the present-day towns of Trumbull, Shelton and Monroe. Shelton was split off from Stratford in 1789, as Huntington (named for Samuel Huntington). The current name originated in a manufacturing village started in the 1860s named for the Shelton Company founded by Edward N. Shelton — also founder of Ousatonic Water Power Company. The rapidly growing borough of Shelton incorporated as a city in 1915 and was consolidated with the town of Huntington in 1919 establishing the present city of Shelton.

Shelton was the site of one of the largest arson fires in the United States history. It happened in 1975 when the Sponge Rubber Products plant (formerly owned by B.F. Goodrich) was set on fire. Charles Moeller, president of parent company Grand Sheet Metal Products, was acquitted on arson charges, but in a civil lawsuit, a jury in 1988 ruled the insurer did not have to pay claims on the fire because a preponderance of evidence showed the company's top officials arranged the fire to claim insurance money. Eight others were convicted or pleaded guilty.

The explosion that destroyed the Sponge Rubber Plant on Canal Street in 1975 marked the start of the decline of Shelton's industries. During the remainder of the 1970s and 1980s several firms that operated factories along the banks of the Housatonic River either went out of business or relocated to areas where labor and operating costs were cheaper. In 1995, Sikorsky Aircraft closed a plant off Bridgeport Avenue that manufactured electrical components for helicopters.

With the completion of Route 8, new office spaces and businesses were attracted to the town, due to its Fairfield County location coupled with low costs of doing business as opposed to places such as Stamford or Greenwich. Major firms such as Tetley Tea, TIE Communication, I.T.T., Black and Decker, Sikorsky Aircraft, Gama Aviation, Chesebrough-Pond's, Tetra-Pak, General Electric, and Bunker Ramo. Over 2,000,000 square feet (190,000 m2) of corporate office space spread across 12 buildings was constructed by the R.D. Scinto corporation alone. 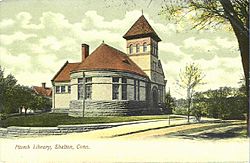 Efforts are underway to restore nineteenth-century industrial buildings in the downtown area; those that were beyond repair were demolished in the late 1990s and early 2000s and replaced with the Veteran's Memorial and a farmer's market. The 10-acre (40,000 m2) Riverwalk Park next to the Veterans Memorial was created on the site of the former Sponge Rubber Plant. Other buildings along Howe Avenue, one of the city's main thoroughfares, have been restored, while developers have renovated two 19th-century factory buildings on Bridge Street, converting them into luxury condominiums. Several downtown streets have been reconstructed as part of a streetscape improvement project: sidewalks were reconstructed with brick and cobblestone, trees were planted, and some power lines were rerouted underground to improve the appearance of Shelton's central business district. In March 2008, Connecticut Governor M. Jodi Rell announced that after negotiations with State Senator Dan Debicella and State Representative Jason Perillo, state bond funds in the amount of $2 million would be directed toward additional infrastructure improvements leading to over $100 million in private investment in the city's downtown.

In November 2007, a tree growing on Soundview Avenue in Shelton was selected and felled to be the Rockefeller Center Christmas tree.

On May 30, 2008, producers and staff for the upcoming movie All Good Things shot one scene on Canal St. in downtown Shelton. The scene was underneath the train trestle and involved one of the characters dragging a body and dumping it into the Housatonic River.

On July 31, 2009, a line of heavy thunderstorms with weak rotation spawned an EF1 tornado, which touched down with wind speeds between 95 and 105 miles per hour. According to WTNH, the most concentrated damage was along the Oronoque Trail, where many trees were blown down. There were no injuries or fatalities.

In November 2013, a tree located on Kazo Drive was picked to be the second Rockefeller Center Christmas tree from Shelton. 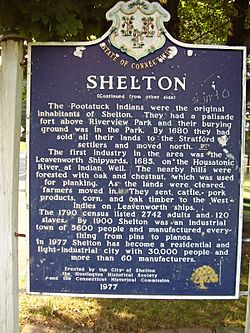 There were 14,190 households out of which 32.8% had children under the age of 18 living with them, 62.9% were married couples living together, 8.5% had a female householder with no husband present, and 25.7% were non-families. 21.8% of all households were made up of individuals and 9.2% had someone living alone who was 65 years of age or older. The average household size was 2.65 and the average family size was 3.11.

The City of Shelton's goal is to preserve at least 15% of the land as permanently protected, locally controlled open space in the following three forms: City of Shelton Public Open Space properties, Privately owned farmland protected by the purchase of development rights, and properties held by the non-profit Shelton Land Conservation Trust. As of 2009, these forms of open space amount to 13% of the City and more than 2,700 acres (11 km2). The City of Shelton owns close to 2,000 acres (8.1 km2) of Public Open Space, Protected Farmland is 411 acres (1.66 km2), and the Shelton Land Trust organization has preserved 364 acres (1.47 km2).

There are over 15 miles (24 km) of hiking trails in Shelton, including a portion of the Paugussett "Blue Blazed" trail, part of a 800-mile (1,300 km) network of hiking trails throughout the state. There is opportunity for fishing, boating, geocaching and letterboxing, hiking, walking and biking. Dogs are welcomed when on leash. There is no hunting on city-owned open space, by ordinance.

There are two private golf courses in town. Highland Golf Club of Shelton is located in the downtown Shelton area where it was founded in 1900, only 6 years after the USGA was organized. It is a 9-hole course (with 10 greens to allow alternating #2 and #11 where the tee shot goes over Perry Hill Road) in which an unknown original designer created difficult greens. The clubhouse's 1920s era structure still remains as the core to the current structure. Brownson Country Club is an 18-hole venue located in the Huntington section of Shelton. There is an annual competition between the clubs for the "Mayor's Trophy", alternating the venue each year. The 2009 Champion and holder of the Trophy is Highland. 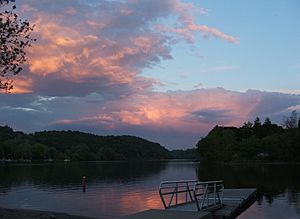 All content from Kiddle encyclopedia articles (including the article images and facts) can be freely used under Attribution-ShareAlike license, unless stated otherwise. Cite this article:
Shelton, Connecticut Facts for Kids. Kiddle Encyclopedia.