Sikorsky Aircraft is an American aircraft manufacturer based in Stratford, Connecticut. It was established by Russian–American aviator Igor Sikorsky in 1923 and was among the first companies to manufacture helicopters for civilian and military use.

On May 23, 1923, the "Sikorsky Aero Engineering Corporation" was founded near Roosevelt Field, New York, by Igor Sikorsky, an immigrant to the United States who was born in Kyiv. In 1925, the company name was changed to "Sikorsky Manufacturing Company". In 1929, the company moved to Stratford, Connecticut, and it became a part of United Aircraft and Transport Corporation (later United Technologies Corporation) in July of that year. 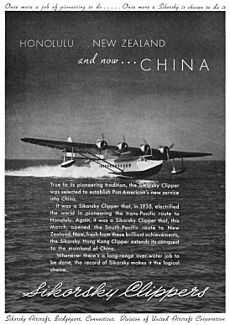 In the United States, Igor Sikorsky originally concentrated on the development of multi-engined landplanes and then amphibious aircraft. In the late 1930s, sales declined and United Aircraft merged his division with Vought Aircraft. He then began work on developing a practical helicopter. After first flying the VS-300 he developed the Sikorsky R-4, the first stable, single-rotor, fully controllable helicopter to enter full-scale production in 1942, upon which most subsequent helicopters were based.

Sikorsky Aircraft remains a leading helicopter manufacturer, producing such well-known models as the UH-60 Black Hawk and SH-60 Seahawk, and experimental types like the Sikorsky S-72. Sikorsky has supplied the Presidential helicopter since 1957. Sikorsky's VH-3 and VH-60 perform this role now.

United Technologies Corporation (UTC) acquired Schweizer Aircraft Corp. in 2004, after which it operated as a subsidiary of Sikorsky. The product lines of the two firms were complementary, and had little overlap, as Sikorsky primarily concentrates on medium and large helicopters, while Schweizer produces small helicopters, UAVs, gliders, and light planes. The Schweizer deal was signed on August 26, 2004, exactly one week after the death of Paul Schweizer, the company's founder and majority owner. In late 2005, Sikorsky completed the purchase of Keystone Helicopter Corporation, located in Coatesville, Pennsylvania. Keystone had been maintaining and completing Sikorsky S-76 and S-92 helicopters prior to the sale.

In 2011, Sikorsky laid off 400 workers at the Hawk Works plant, and later in 2012 the remaining 570 workers and closed all Sikorsky facilities in Chemung County; moving the military completion work to their West Palm Beach, Florida, facility. The commercial products had already been moved to their Coatesville, Pennsylvania facility.

Sikorsky's main plant, and administrative offices are located in Stratford, Connecticut, as is a large company-owned private heliport (ICAO: KJSD, FAA LID: JSD). Other Sikorsky facilities are in Trumbull, Shelton, and Bridgeport, Connecticut (with small company heliport (FAA LID: CT37)); Fort Worth, Texas; West Palm Beach, Florida; and Huntsville and Troy, Alabama. Other Sikorsky-owned subsidiaries are in Coatesville, Pennsylvania, Grand Prairie, Texas, and others around the world.

In 2015, UTC considered Sikorsky to be less profitable than its other subsidiaries, and analyzed a possible spin-off rather than a tax-heavy sale.

On July 20, 2015, Lockheed Martin announced an agreement to purchase Sikorsky from UTC for $9.0 billion. The deal required review from eight different jurisdictions, and the final approval (from Chinese government) came in November 2015. The sale was completed on November 6, 2015.

In 1980, the American Helicopter Society International offered a prize of US$10,000 for the first human-powered helicopter flight (60-second duration, a height of 3 meters, and staying within an area of 10 x 10 m) and soon increased prize money to US$25,000. In 2010, Sikorsky Aircraft pledged to increase the prize sponsorship to US$250,000. The Canadian engineers Dr. Todd Reichert and Cameron Robertson developed the world's largest ever human powered helicopter with a team from the University of Toronto. The first flight of AeroVelo Atlas was achieved in August 2012, the 64-second, 3.3-m-flight that won the prize on June 13, 2013.

All content from Kiddle encyclopedia articles (including the article images and facts) can be freely used under Attribution-ShareAlike license, unless stated otherwise. Cite this article:
Sikorsky Aircraft Facts for Kids. Kiddle Encyclopedia.