Stamford is a city in Fairfield County, Connecticut, United States. According to the 2010 census, the population of the city is 122,643. As of July 1, 2014, according to the Census Bureau, the population of Stamford had risen to 128,278, making it the third-largest city in the state and the seventh-largest city in New England. Approximately 30 miles (50 kilometers) from Manhattan, Stamford is in the Bridgeport-Stamford-Norwalk Metro area which is a part of the Greater New York metropolitan area.

Stamford is home to four Fortune 500 Companies, nine Fortune 1000 Companies, and 13 Courant 100 Companies, as well as numerous divisions of large corporations. This gives Stamford the largest financial district in New York Metro outside New York City itself and one of the largest concentrations of corporations in the nation. Stamford is also home to the Stamford Waterside Design District - a creative neighborhood and shopping destination dedicated to Interior Design and Architecture.

Stamford was known as Rippowam by the Native American inhabitants to the region, and the very first European settlers to the area also referred to it as such. The name was later changed to Stamford after the town Stamford, Lincolnshire, England. The deed to Stamford was signed on July 1, 1640 between Captain Turner of the New Haven Colony and Chief Ponus. By the 18th century, one of the primary industries of the town was merchandising by water, which was possible due to Stamford's proximity to New York. 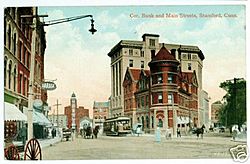 Bank and Main Streets, from a 1911 postcard

In 1692, Stamford was home to a less famous witch trial than the well-known Salem witch trials, which also occurred in 1692. The accusations were less fanatical and smaller-scale but also grew to prominence through gossip and hysterics.

Starting in the late 19th century, New York residents built summer homes on the shoreline, and even back then there were some who moved to Stamford permanently and started commuting to Manhattan by train, although the practice became more popular later. Stamford incorporated as a city in 1893.

In the 1960s and 1970s, Stamford's commercial real estate boomed as corporations relocated from New York City to peripheral areas. A massive urban redevelopment campaign during that time resulted in a downtown with many tall office buildings. The F.D. Rich Co. was the city-designated urban renewal developer of the downtown in an ongoing redevelopment project that was contentious, beginning in the 1960s and continuing through the 1970s. The company put up what was the city's tallest structure, One Landmark Square, at 21 floors high, and the GTE building (now One Stamford Forum), along with the Marriott Hotel, the Stamford Town Center and many of the other downtown office buildings. One Landmark Square has since been dwarfed by the new 35-story Trump Parc condominium tower (topped out), and soon by the 400-foot 39 story Ritz Carlton Hotel and Residences development, another project by the Rich Company in partnership with Cappelli Enterprises. Over the years, other developers have joined in building up the downtown, a process that continued, with breaks during downturns in the economy, through the 1980s, 1990s and into the new century.

Since 2008, an 80-acre mixed-use redevelopment project for the Stamford's Harbor Point neighborhood has added additional growth south of the city's Downtown area. Once complete, the redevelopment will include 6,000,000 square feet (560,000 m²) of new residential, retail, office and hotel space, and a marina. As of July 2012, roughly 900 of the projected 4,000 Harbor Point residential units had been constructed.

Stamford is situated near the southwestern point of Connecticut. It comprises a number of neighborhoods and villages including Cove-East Side, Downtown, North Stamford, Glenbrook, West Side, Turn Of River, Waterside, Springdale, Belltown, Ridgeway, Newfield, South End, Westover, Shippan, Roxbury and Palmers Hill. There are still a number of references to North Stamford as a separate town, but they legally and functionally act as one town. Surrounding towns include Pound Ridge, New York to the north, Greenwich to the west, and both Darien and New Canaan to the east.

Stamford, like the rest of coastal Connecticut, lies in the broad transition zone between the cold continental climate to the north (Köppen climate classification: Dfa) and the more mild temperate/subtropical climate (Köppen Cfa), to the south. Coastal Connecticut, Long Island/NYC, and northern New Jersey are the general dividing line between theses two climate zones.

The warm/hot season in Stamford is from mid-April through late October. Late day thundershowers are common in the hottest months (June, July, August), despite the mostly sunny skies. The cool/cold season is from late November though mid March. Winter weather is far more variable than summer weather along the Connecticut coast, ranging from sunny days with higher temperatures to cold and blustery conditions with occasional snow. Like much of the Connecticut coast and nearby Long Island, NY, some of the winter precipitation is rain or a mix and rain and wet snow in Stamford. Stamford averages about 30 inches (75 cm) of snow annually, compared to inland areas like Hartford and Albany which average 45–60 inches (110–150 cm) of snow annually.

Coastal Connecticut is the broad transition zone where so-called "subtropical indicator" plants and other broadleaf evergreens can successfully be cultivated. Stamford averages about 90 days annually with freeze - about the same as Baltimore, Maryland. As such, Southern Magnolias, Needle Palms, Windmill palm, Loblolly Pines, and Crape Myrtles are grown in private and public gardens. Like much of coastal Connecticut, Long Island, and coastal New Jersey, the growing season is rather long in Stamford - averaging 210 days from April 8 to November 5 according to the National Weather Service in Bridgeport.

Stamford is composed of approximately 45 distinct neighborhoods, including 2 historic districts.

The commonly known neighborhoods throughout Stamford (with ZIP Codes that roughly cover the same areas) are as follow:

The 2010 Census Population for Stamford is 122,643. A 2009 Census survey estimated 48,676 housing units to be in existence. Stamford's population characteristics are as follows (Source:U.S. Census Bureau, 2010 US Census): 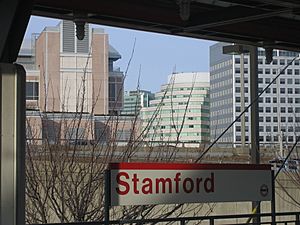 Stamford is located on the main branch of the New Haven Line on the Metro-North Railroad, the commuter rail system for northern metropolitan New York City. Stamford is the third busiest station on the Metro-North system and serves as a major transfer point for local trains. Stamford Station is also the terminus of a Metro-North branch that ends in New Canaan, 8 mi (13 km) away, and a part-time terminal of Shore Line East trains. Two smaller train stations in Stamford are Glenbrook and Springdale, both a part of the New Canaan branch. With a recent spike in development in the East Side neighborhood, the city is considering putting in a proposal to construct a new stop to service the East Main Street area close to the New Canaan branch overpass.

Commuter trains come into Stamford from all points between New London to the east and New York (Grand Central Terminal) to the south. Many express (non-stop) trains leave Stamford each morning and evening for Grand Central. The average non-stop commute is forty-seven minutes. Stamford has seen a significant increase in ridership. Much of this increase is a result of reverse commuting, individuals commuting from New York City to Stamford for work. Trains operate from the Stamford station between 4:43 AM (first departure to Grand Central) until 12:55 AM (last departure to Grand Central). On the weekends the first departure for Grand Central occurs at 5:03 AM. Fares during rush hour (on peak) are higher than during non-rush hour (off peak). On peak fares are charged between 4:43 AM – 9:10 AM for trains originating to Grand Central. Trains in transit to Stamford are charged on peak fares from 5:35 AM – 8:37 AM and from 4:02 PM – 7:40 PM. On peak fares do not apply on weekends and/or holidays. Tickets can be bought on board, yet the surcharge can make the price steep.

Late in 2007 the city contracted a private San Francisco company to conduct a 6-month feasibility study to look at the possibility of creating an inner-city light rail line. With the proposed Harbor Point development set to break ground in the South End neighborhood sometime in 2008, the idea is to create a line that would connect the new developments to points north, such as the transportation center, Landmark Square in downtown and other various points up to the Bulls Head area.

City bus transportation is provided by CT Transit, which is run and financed by the Connecticut Department of Transportation. The main terminal is adjacent to the train station on State Street, under the I-95 highway. Bus service runs along major arterial roads through the towns of Darien, Norwalk, Greenwich and Port Chester, New York. A non-stop direct route is also offered to White Plains, New York. Commuters can connect in Norwalk to points as far east as Milford and as far north as Danbury. Additional connections can be made in Port Chester and White Plains to all points covered by the Bee-Line bus system in Westchester County.

Stamford is also served by four other state highways. Route 1, also known as Main Street in Stamford, is also used as a major artery during the morning and evening commute. Most traffic via Route 1 is short distance or fairly local, yet vehicles have utilized Route 1 during times of heavy congestion on I-95 as a re-route. Route 137 (Washington Boulevard and High Ridge Road) is the main north-south road of the city and runs from the Stamford Transportation Center and serves the Turn of River, North Stamford, and High Ridge sections of the city. Route 104 (Long Ridge Road) branches off from Route 137 to serve the Long Ridge section. Route 106 (Courtland Avenue) serves the Glenbrook neighborhood and continues towards the town of Darien.

Stamford's public library, the Ferguson Library, is one of the largest in Connecticut. The main library downtown is the second in the country to rent space to a Starbucks (since September 1999). The store has its own doors to the street and to the library, and is open earlier and later than the library. The library also shows movies and has a used-book store run by Friends of Ferguson Library.

The library has branches in South End, Springdale, and the Turn of River sections of the city, it also has a bookmobile that runs daily to different neighborhoods. The Turn of River branch, officially called the Harry Bennett Branch, is the largest library branch in the state. That branch also has a used book store run by Friends of Ferguson Library. 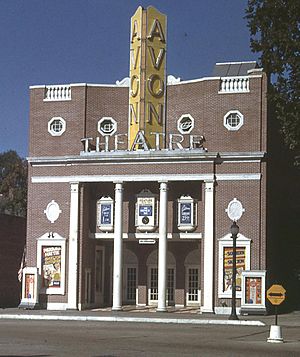 The Stamford Waterside Design District is a creative neighborhood and shopping destination dedicated to Interior Design and Architecture.

All content from Kiddle encyclopedia articles (including the article images and facts) can be freely used under Attribution-ShareAlike license, unless stated otherwise. Cite this article:
Stamford, Connecticut Facts for Kids. Kiddle Encyclopedia.