New Canaan is a town in Fairfield County, Connecticut, United States. The population was 19,738 according to the 2010 census.

About an hour's train ride from Manhattan, the town is considered part of Connecticut's Gold Coast. The town is bounded on the south by Darien, on west by Stamford, on the east by Wilton, on the southeast by Norwalk, and on the north by Lewisboro and Pound Ridge in Westchester County, New York.

New Canaan is known for its wide range of architecture and vast public parks such as Waveny Park, and a signature town center with classic boutiques. Residents carol on God's Acre every Christmas Eve, a town tradition since 1916.

According to the United States Census Bureau, the town has a total area of 22.5 square miles (58 km2), of which 22.1 square miles (57 km2) is land and 0.3 square miles (0.78 km2), or 1.56%, is water. The town is served by the Merritt Parkway and by a spur line of the Metro-North Railroad. The downtown area consists of many fine restaurants, an old Bow Tie Cinemas movie theater, library, the Victorian train station, antique shops, a book store, a saddlery boutique and various fine clothing and interior decorating shops. In addition to the many local boutiques and businesses, many national chains stores can be found in the downtown area, including Ralph Lauren and Ralph Lauren Children, Ann Taylor, J. McLaughlin, Papyrus, Vineyard Vines, Le Pain Quotidien, and Starbucks, among others. There are also several churches in town (Catholic and various Protestant denominations) as well as the historic Roger Sherman Inn, established in 1740. Most major banks and many wealth managements firms have a presence in New Canaan, including J.P Morgan, Merrill Lynch, Wells Fargo, UBS, Citibank and Bank of America, among others. Several hedge funds are also based in New Canaan.

The town is bounded on the south by Darien, on west by Stamford, on the east by Wilton, on the southeast by Norwalk and on the north by Lewisboro and Pound Ridge in Westchester County, New York. 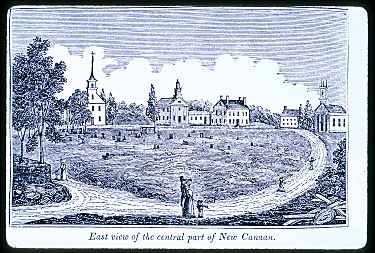 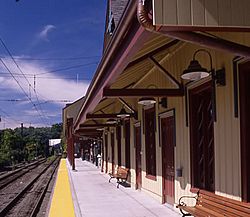 In 1731, Connecticut's colonial legislature established Canaan Parish as a religious entity in northwestern Norwalk and northeastern Stamford. The right to form a Congregational church was granted to the few families scattered through the area. As inhabitants of Norwalk or Stamford, Canaan Parish settlers still had to vote, pay taxes, serve on juries, and file deeds in their home towns. Because Canaan Parish was not planned as a town when it was first settled in 1731, when New Canaan was incorporated in 1801, it found itself without a central common, a main street or a town hall.

Until the Revolutionary War, New Canaan was primarily an agricultural community. After the war, New Canaan's major industry was shoe making. As New Canaan's shoe business gathered momentum early in the nineteenth century, instead of a central village, regional settlements of clustered houses, mill, and school developed into distinct district centers. Some of the districts were centered on Ponus Ridge, West Road, Oenoke Ridge, Smith Ridge, Talmadge Hill and Silvermine, a pattern which the village gradually outgrew.

With the 1868 advent of the railroad to New Canaan, many of New York City's wealthy residents discovered the quiet, pastoral beauty of the area and built magnificent summer homes. Eventually, many of the summer visitors settled year-round, commuting to their jobs in New York City and creating the genteel, sophisticated country ambiance that continues to characterise the community today.

Lewis Lapham, a founder of Texaco and great-grandfather of long-time Harper's Magazine editor Lewis H. Lapham, spent summers with his family at their estate that is now 300-acre (1.2 km2) Waveny Park next to Talmadge Hill and the Merritt Parkway.

In the 1890s, editor Will Kirk of the Messenger wrote an editorial in response to area editors who chided him and New Canaan as the “next station to hell.” An alleged remark by a parched Civil War veteran marching in the Decoration Day Parade on an unusually hot day prompted the exchange. The remark was found untrue and Kirk, after enduring the comments of others, wrote about a “dream” of approaching the Pearly Gates in the company of his fellow editors. All others were turned away but he, Will Kirk, was welcomed, because he, in fact, was from the “Next Station to Heaven.” Since then, the name has been controversial, with residents affectionately using the latter, and local critics of New Canaan still using the original nickname.

The "Harvard Five" and modern homes

New Canaan was an important center of the modern design movement from the late 1940s through roughly the 1960s, when about 80 modern homes were built in town. About 20 have been torn down since then.

"During the late 1940s and 50s, a group of students and teachers from the Harvard Graduate School of Design migrated to New Canaan ... and rocked the world of architectural design", according to an article in PureContemporary.com, an online architecture design magazine. "Philip Johnson, Marcel Breuer, Landis Gores, John M. Johansen and Eliot Noyes – known as the Harvard Five – began creating homes in a style that emerged as the complete antithesis of the traditional build. Using new materials and open floor plans, best captured by Johnson's Glass House, these treasures are being squandered as buyers are knocking down these architectural icons and replacing them with cookie-cutter new builds."

"Other architects, well known (Frank Lloyd Wright, for example) and not so well known, also contributed significant modern houses that elicited strong reactions from nearly everyone who saw them and are still astonishing today ... New Canaan came to be the locus of the modern movement's experimentation in materials, construction methods, space, and form", according to an online description of The Harvard Five in New Canaan: Mid-Century Modern Houses, by William D. Earls.

The film The Ice Storm (1997) shows many of New Canaan's modern houses, both inside and out. The film (and Rick Moody's novel of the same name, upon which it's based) takes place in New Canaan; a mostly glass house situated on Laurel Road is prominently featured. 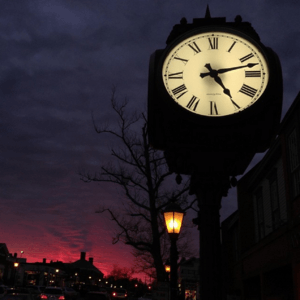 Moreno Clock located on Elm Street where it meets with South Avenue in New Canaan, Connecticut.

All Hallows Eve (Halloween) Parade: No matter your costume, children of all ages and their dogs can receive a goody bag and march in the Parade led by Old Faithful Antique Fire Truck which is sponsored by the New Canaan Chamber of Commerce.

Holiday Stroll: Hosted by The Chamber of Commerce, downtown New Canaan celebrates with Christmas carolers, the lighting of the trees along Elm Street, the arrival of Santa Claus, and extended store hours.

Easter Egg Hunt: At the Annual Town Easter Egg Hunt, sponsored by the Young Women's League of New Canaan, children are able to collect candy-filled Easter eggs, get their faces painted, take pictures with the Easter bunny, and many other festive activities.

New Canaan in the media

Movies at least partially filmed in, or involving, New Canaan: 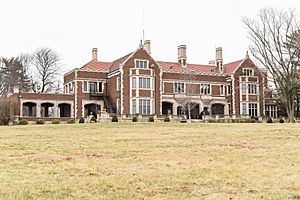 Waveny Mansion in New Canaan, residence of Christopher Lloyd; his mother donated it to the town 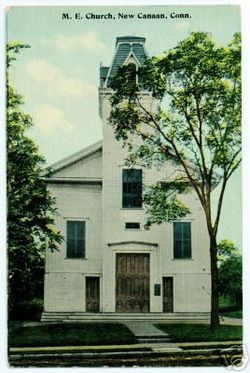 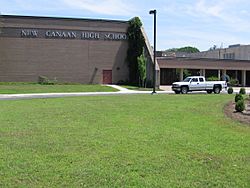 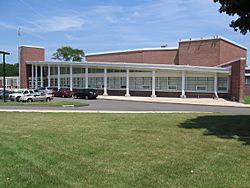 The New Canaan Public Schools system is considered to be one of the best in Connecticut. It has also gained national recognition for its high performance; for example, a recent edition of Forbes rated New Canaan as the third-ranked school district in the United States "for home value" for communities with a median home price of $800,000 or greater. In 2019, New Canaan High School was ranked the sixth-best public high school in Connecticut behind Darien and Weston, and one of the top in the nation.

In its November 2009 edition, Connecticut magazine rated New Canaan's school system first among 29 towns with a population of 15,000–25,000. That category included Darien, Wilton, Ridgefield, Avon, Simsbury, Farmington, Southbury, Guilford, and other high-performing districts. The ranking was based on 2007–2009 CMTs, results from the 2007–2009 CAPTs, local SAT scores for 2006–2008, and the percentage of 2007 high school graduates who enrolled in college.

Of the New Canaan High School graduates who enrolled in college in the fall of 2009, 30% did so at a college designated "Most Competitive" by Barron's magazine, 24% enrolled at an institution considered "Highly Competitive", and 26% entered a college deemed to be "Very Competitive".

The New Canaan High School Library was the recipient of the 2010 National School Library Program of the Year Award, given by the American Library Association. In addition to the award, the high school also received a $10,000 prize donated by Follet Library Resources.

New Canaan is one of the few school systems in Connecticut to offer foreign-language instruction to students before middle school, as a Spanish program exists for all grades to expose students to a foreign language earlier in their lives. Grades 6–12 have language offerings including French, Latin, Mandarin Chinese, and Spanish.

In June 2012, 24/7 Wall St. ranked New Canaan as the eighth-wealthiest school district in the United States.

All content from Kiddle encyclopedia articles (including the article images and facts) can be freely used under Attribution-ShareAlike license, unless stated otherwise. Cite this article:
New Canaan, Connecticut Facts for Kids. Kiddle Encyclopedia.