Wilton is a town in Fairfield County, Connecticut. As of the 2010 census, the town population was 18,062.

Officially recognized as a parish in 1726, Wilton today is a residential community with open lands, historic architecture such as the Round House, and many colonial homes. Many residents commute to nearby cities such as Stamford or New York City.

Wilton is home to many global corporations such as ASML, Deloitte, Breitling SA, Cannondale Bicycle Corporation, and Melissa & Doug. It is also home to AIG Financial Products, whose collapse played a pivotal role in the financial crisis of 2007–2008.

The original 40 families of the parish began their own Congregational church and were allowed by Norwalk to hire a minister (Robert Sturgeon, who also became the town's first schoolmaster), open schools and build roads.

With a strong anti-slavery sentiment by its residents, Wilton served as a stop on the Underground Railroad.

Wilton was classified as a "dry" town until 1993, when the local ordinance was altered to permit the sale of alcoholic beverages in restaurants. The town was then referred to as "damp". On November 5, 2009, a referendum proposal was passed to allow liquor stores. The town Board enacted an ordinance to allow liquor stores to sell alcoholic beverages in 2010, and several stores have since opened.

The scenic Ridgefield Road offers a look at many historic homes, places, and sights.

Housing and land use 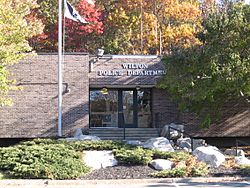 Wilton has, by some estimates, more than 500 restored 18th- and 19th-century homes, although some old houses have been demolished. In 2005, Marilyn Gould—Wilton's second selectman and director of the Wilton Historical Society—told the New York Times, "People aren't taking down historic houses but the more modest homes that were built in the '50s and '60s," she said. "What that's doing is changing the affordability of the town and the demographic of the town. Wilton used to have a wide demographic of people who worked with their hands - artisans, builders, mechanics. Now its management and upper management." Between 1999 and 2005, the town's voters endorsed spending $23 million through municipal bonds to preserve land.

South Norwalk Electric and Water (SNEW) has a reservoir on the western side of town with about 350 acres (1.4 km2) of land (along with another 25 acres (100,000 m2) adjacent in New Canaan). In the fall, hunters with bows and arrows—no more than 10 at a time—are allowed to hunt deer on the Wilton property in order to keep down the number of deer in the area.

Wilton's town center contains several local restaurants, boutiques, retail stores, a Starbucks, a Stop & Shop, and a four-screen movie theater owned by Bow-Tie Cinemas. These stores were added around 2000 next to the old Wilton Center, which consists of the Wilton Library, the Wilton Post Office, a CVS/Pharmacy, the Old Post Office Square, and the Village Market. In the southern part of town, US 7 contains a commercial section.

Recent nature access developments in town include the expansion of the Norwalk River Valley Trail, a multi-use trail that is designed to eventually run between Norwalk and Danbury.

The southwest corner of town includes part of the Silvermine neighborhood (which also extends into New Canaan and Norwalk). Georgetown, which is primarily in Redding and partly in Weston, extends a bit into the northeast corner of town. Other neighborhoods in town are South Wilton, Wilton Center, Gilbert Corners, Cannondale, and North Wilton.

There were 5,923 households, out of which 46.6% had children under the age of 18 living with them, 75.4% were married couples living together, 5.4% had a female householder with no husband present, and 17.7% were non-families. Of all households 15.3% were made up of individuals, and 6.6% had someone living alone who was 65 years of age or older. The average household size was 2.91 and the average family size was 3.25.

Clubs and civic organizations in town include a Newcomers Club, Wilton Women's club, League of Women Voters, Kiwanis Club, The Wilton Kiwanis youth coalition, senior meal delivery, Boy Scouts, Cub Scouts, the Wilton Land Conservation Trust, the Wilton Family Y and the Moms Club of Wilton. Cultural amenities include the Wilton Historical Society, a Library Association, an Arts Council, an Audubon Society, the Wilton Singers and the Wilton Playshop. Some church organizations at Our Lady of Fatima include the Knights of Columbus and the Columbiettes.

The Wilton Parks and Recreation Department offers a number of programs for all ages including pre-school programs, senior programs youth soccer and basketball. There are also many walking paths including part of the Norwalk River Valley Trail. Merwin Meadows is a picnic area for families with a pond, playground and athletic field.

There are several highways that crisscross the town, including U.S. Route 7 and Route 33, which form the main north-south roadways in town. While not passing through any part of Wilton, the Merritt Parkway (Route 15) also serves the town via the Route 33 exit (Exit 41) which is signed for Wilton, as well as the Route 7 exits (Exits 39B & 40B) which are signed for Danbury. Other state highways that run through Wilton are Route 53 and Route 106.

The town has two railroad stations: Wilton in the town center and Cannondale (a sub-station where tickets are not sold), both part of the Danbury Line of Metro-North Railroad providing direct no-change high-speed, and WIFI-enabled commuter train service to Norwalk (8 mins), Stamford (15 mins), Greenwich (25mins), and NY City's Grand Central Station (70 mins) to the south; New Haven and Boston to the north. Connecting to Amtrak for the Boston to Washington, DC corridor is at the Stamford station. Executives and other professionals and commuters develop at-station and in-car professional and personal networks during the daily commute.

The town is served by "7 Link" bus route of the Norwalk Transit District that runs between Norwalk and Danbury along the Route 7 corridor. A commuter shuttle bus during rush hours is also available between southern Wilton and the South Norwalk railroad station on the New Haven Line.

The Town of Wilton has approximately 4,150 students who attend pre-K through 12th grade in the four schools. The two elementary schools have class sizes typically ranging from 18 to 22 and a 19 to 1 student/teacher ratio. Middlebrook features interdisciplinary instruction teams in languages and science, mathematics, social studies, computers, art, and gifted student instruction. Class sizes range from 20 to 25 students with a student/teacher ratio of 13 to 1.

There are four private schools in the town:

There are several roads and highways that crisscross the town, including U.S. Route 7 and Route 33, which form the main north-south roadways in town. Although not passing through any part of Wilton, the Merritt Parkway (Route 15) also serves the town via the Route 33 exit (Exit 41) which is signed for Wilton/Westport, as well as the Route 7 exits (Exits 39B & 40B) which are signed for Danbury. Other state highways that run through Wilton are Route 53 and Route 106.

The town has two railroad stations: Wilton near the town center and Cannondale. Both are served by Metro-North Railroad's Danbury Branch, which provides direct commuter train service south to Norwalk (15 minutes), Stamford (25 minutes), Danbury (33 Minutes), and New York City's Grand Central Station (90 minutes); and north to New Haven and Boston. Previously, Wilton was also home to a third station. Known as South Wilton (1852–1971) and Kent Road (1976–1994). The town was also formerly served by the Georgetown station from 1852-1970.

The town is served by the 7 Link bus route of the Norwalk Transit District that runs between Norwalk and Danbury along the Route 7 corridor. A commuter shuttle bus during rush hours is also available between South Wilton and the South Norwalk railroad station on the New Haven Line.

All content from Kiddle encyclopedia articles (including the article images and facts) can be freely used under Attribution-ShareAlike license, unless stated otherwise. Cite this article:
Wilton, Connecticut Facts for Kids. Kiddle Encyclopedia.