Redding is a town in Fairfield County, Connecticut, United States. The population was 9,158 at the 2010 census.

Redding has four primary sections: Redding Center, Redding Ridge, West Redding (including Lonetown, Sanfordtown, and Topstone), and Georgetown, which is situated at the junction of Redding, Ridgefield, Weston and Wilton.

Four streams flow south through Redding toward Long Island Sound: the Aspetuck River, the Little River, the Norwalk River and the Saugatuck River.

At the time colonials began receiving grants for land within the boundaries of present-day Redding, Native American trails crossed through portions of the area, including the Berkshire Path running north-south.

In 1639, Roger Ludlow (also referenced as Roger Ludlowe in many accounts) purchased land from local Native Americans to establish Fairfield, and in 1668 Fairfield purchased another tract of land then called Northfield, which comprised land that is now part of Redding.

For settlement purposes, Fairfield authorities divided the newly available land into parcels dubbed "long lots" at the time, which north-south measured no more than a third of a mile wide but extended east-west as long as 15 miles. Immediately north of the long lots was a similar-sized parcel of land known as The Oblong.

There are varying accounts as to the first colonial landholder in the Redding area; multiple citations suggest a Fairfield man named Richard Osborn obtained land there in 1671, while differing on how many acres he secured. Nathan Gold, a Fairfield man who would serve as deputy governor of Connecticut from 1708 to 1723, received a land grant for 800 acres in 1681.

The first colonials to settle in the area of present-day Redding lived near a Native American village led by Chickens Warrups (also referenced as Chicken Warrups or Sam Mohawk in some accounts), whose name is included on multiple land deeds secured by settlers throughout the area.

According to Fairfield County and state records from the time Redding was formed, the original name of the town was Reading, after the town in Berkshire, England. Probably more accurately, however, town history attributes the name to John Read, an early major landholder who was a prominent lawyer in Boston as well as a former Congregationalist preacher who converted to Anglicanism. Read helped in demarcating the boundaries of the town and in getting it recognized as a parish in 1729. In 1767, soon after incorporation, the name was changed to its current spelling of Redding to better reflect its pronunciation.

In 1809, Congress granted Redding its first U.S. Post Office, which made official in 1844 the spelling of the town's name.

In the years preceding the Declaration of Independence, tensions escalated in Redding between Tory loyalists and larger numbers of those supporting the resolutions of the Continental Congress, with some Tories fleeing to escape retribution. Some 100 Redding men volunteered to serve under Captain Zalmon Read in a company of the new 5th Connecticut Regiment, which participated in the siege of Quebec's Fort Saint-Jean during the autumn of 1775 before the volunteers' terms of service expired in late November.

In 1777, the Continental Congress created a new Continental Army with enlistments lasting three years. The 5th Connecticut Regiment was reformed, enlisting some men from Redding, and assigned to guard military stores in Danbury, Connecticut. Getting word of the depot, the British dispatched a force of some 2,000 soldiers to destroy the stores, landing April 26 at present-day Westport and undertaking a 23-mile march north. The column halted on Redding Ridge for a two-hour respite, with many residents having fled to a wooded, rocky area dubbed the Devil's Den. The British column resumed its march to Danbury where soldiers destroyed the supplies, then skirmished Continental Army and militia forces in Ridgefield while on the return march south.

For the winter of 1778-79, General George Washington decided to split the Continental Army into three divisions encircling New York City, where British General Sir Henry Clinton had taken up winter quarters. Major General Israel Putnam chose Redding as the winter encampment quarters for some 3,000 regulars and militia under his command, at the site of the present-day Putnam Memorial State Park and nearby areas. The Redding encampment allowed Putnam's soldiers to guard the replenished supply depot in Danbury and support any operations along Long Island Sound and the Hudson River Valley. Some of the men were veterans of the winter encampment at Valley Forge, Pennsylvania the previous winter. Soldiers at the Redding camp endured supply shortages, cold temperatures and significant snow, with some historians dubbing the encampment "Connecticut's Valley Forge."

Construction began in 1850 on the Danbury and Norwalk Railroad, which linked those two cities following a 23-mile route along the Norwalk River valley that passed through Redding. Regular steam-engine service commenced March 1, 1852; which would include stations in the West Redding, Topstone and Georgetown sections of Redding.

In 1876, after A.N. Fillow began extracting mica in the Branchville section of Redding, two Yale University mineralogists noted the presence of previously undiscovered minerals lodged in pegmatite there and furnished funds to expand the operation. Historians say the mine produced between seven and nine minerals until then unknown, including one that was named reddingite. Over time, the mine would produce quantities of quartz, feldspar, mica, beryl, spodumene and columbite. There is also a garnet mine in West Redding.

In 1834, Gilbert & Bennett Co. purchased the site of a former comb mill alongside the Norwalk River in the Georgetown section of Redding, and began producing wire mesh cloth for varying uses, in time to include sieves and window screens. In 1863, Gilbert & Bennett built a facility at the site for drawing metal wire. During World War I, the U.S. military adapted the company's products for camouflage netting, gas masks and trench liners; and during World War II, for signal corps uses. 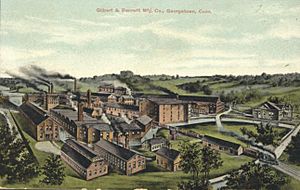 A private equity group purchased the company in 1985, and began relocating operations elsewhere. In 1987, the Gilbert & Bennett site was included as part of the Georgetown Historic District listing on the National Register of Historic Places.

In a 1987 nomination document for the National Register of HIstoric Places, proponents cited Gilbert & Bennett as an "anachronism" in the history of U.S. industry and labor.

"Peaceful, tree-lined residential streets converge on a functioning industrial complex; well-preserved historic houses stand cheek-by-jowl with modern factories; the deteriorated slum neighborhoods associated with modern industry do not exist," the nomination states. "The elite of Georgetown, almost exclusively people associated with Gilbert and Bennett, lived in the midst of their workers. The predictable ethnic neighborhoods did exist in Georgetown, outside the district for the most part, but their employees were apparently encouraged to occupy, or build houses next to the mansions of the managers and officers."

In 1999, the U.S. Environmental Protection Agency designated the factory pond and surrounding land a federal Superfund site to spur the remediation of pollution there. Multiple developers have since attempted to finance the construction of a village development at the Gilbert & Bennett site, to include a mix of residential and commercial buildings. 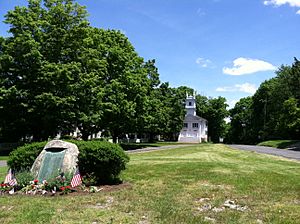 On the Connecticut Historic Resource Inventory

The Connecticut Historic Resource Inventory lists 230 structures in Redding, the oldest built in 1710 by early settler Moses Knapp. The Town of Redding lists another 285 structures that are believed to have been built before 1901 that are not listed in the Connecticut Historic Resource Inventory, the oldest built in 1711 by John Read.

Redding has experienced several disasters, most the result of severe weather events including Hurricane Sandy with tropical storm-force winds when it reached Connecticut October 29, 2012, toppling trees throughout the town and cutting power to 98 percent of homes and businesses.

Sandy was the third storm to cause extensive electrical outages and property damage in Redding and Connecticut within the space of just over 14 months, along with Hurricane Irene in August 2011 and the so-called "Halloween nor'easter" in late October that year. The nor'easter dropped extensive snow onto trees that still had foliage, resulting in an increased number of snapped branches and trunks that damaged property and power lines, with some areas not seeing electricity restored for 11 days.

In 1995, police arrested and a jury subsequently convicted Geoffrey K. Ferguson on charges he shot and killed tenants Scott D. Auerbach and David J. Froehlich, as well as three other men named David A. Gartrell, Sean E. Hiltunen, and Jason M. Trusewicz, at a house in Georgetown.

Beginning October 15, 1955, heavy rains caused flooding along the Norwalk River and other Connecticut waterways. The flood of 1955 resulted in a dam failing at the Gilbert and Bennett factory and the inundation of the Georgetown neighborhood, amid other damage to property and infrastructure.

A 1938 hurricane known as "the Long Island Express" destroyed crops in Redding, but western Connecticut was spared the brunt of the storm that was the most destructive in New England recorded history.

The Great Blizzard of 1888 (also known as the Great White Hurricane of 1888) buried Redding under significant snow in March that year, with one resident recollecting horses and cows "stood to their middles" in snow.

My Brother Sam Is Dead, authored by James Lincoln Collier and Christopher Collier and named a Newbury Honor Book in 1975, was set in Redding during the Revolutionary War.

Secrets of Redding Glen, a children's book written and illustrated by Jo Polseno, chronicles the natural cycle of wildlife along a section of the Saugatuck River.

Movies filmed at least in part in Redding 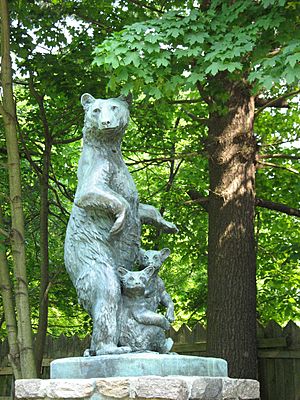 Multiple works by the sculptor Anna Hyatt Huntington are on display in Redding, including "Mother Bear and Cubs" and "Sculpture of Wolves" at the entrance to Collis P. Huntington State Park; "Israel Putnam" at the entrance to Putnam Memorial State Park; "Fighting Stallions" at Redding Elementary School; "A Tribute to the Workhorse" at John Read Middle School; and a smaller version of "The Torch Bearers" at the Mark Twain Library, the original on display in Madrid, Spain.

Mark Twain Library holds an annual art show as a fundraiser, which draws artists from throughout the Northeast to exhibit works, and displays varying works of art and historic objects throughout the year. In 2008, the library received on loan the Gary Lee Price sculpture "Ever the Twain Shall Meet," depicting Twain in the company of Tom Sawyer and Becky Thatcher, two fictional characters he created.

The composer Charles Ives titled the second movement of his "Three Places in New England (Orchestral Set No. 1)" as "Putnam's Camp, Redding Connecticut." The composition is renowned for Ives attempt to produce an auditory experience akin to that experienced by a child at a parade, borrowing elements of several patriotic songs including "Yankee Doodle Dandy" and employing orchestral techniques to approximate the parade experience, for instance the sound of a band approaching while playing a song even as another recedes into the distance playing a different tune.

Redding sponsors free "Concerts on the Green" Sundays from June to August, which draw varied music acts from throughout the area.

Metro-North Railroad's Danbury Branch has a station at West Redding.

All content from Kiddle encyclopedia articles (including the article images and facts) can be freely used under Attribution-ShareAlike license, unless stated otherwise. Cite this article:
Redding, Connecticut Facts for Kids. Kiddle Encyclopedia.