Hurricane Sandy was an Atlantic tropical cyclone which affected parts of the Caribbean, Mid-Atlantic and Northeastern United States in late October 2012, and became the largest Atlantic hurricane in diameter, with winds spanning 1,100 miles (1,800 km). It made landfall on the East Coast of the United States and Eastern Canada (Nova Scotia). Sandy is the eighteenth tropical cyclone, eighteenth named storm, and tenth hurricane of the 2012 Atlantic hurricane season. The storm developed from a tropical wave in the western Caribbean Sea on October 22. It quickly got bigger and stronger after becoming a tropical depression. It was then upgraded to a tropical storm six hours later. Sandy moved slowly northward toward the Greater Antilles and got stronger. On October 24, Sandy made landfall in Jamaica and was upgraded to a hurricane. Sandy made a second landfall in Cuba, where it became a Category 3 hurricane.

At least 43 people were killed: 40 in the Caribbean and three in the Bahamas. On October 25, Sandy got weaker and became a Category 1 hurricane. On October 27, Sandy became a tropical storm for a few hours. It then became a Category 1 hurricane again that morning. On October 26, Washington, D.C. Mayor Vincent Gray declared a state of emergency for the nation's capital. That same day the governors of Connecticut, Maryland, Massachusetts, New York, Pennsylvania and Virginia also declared a state of emergency. Landfall in New Jersey came on October 29. Damage was extensive there and in New York. It was the 2nd costliest hurricane behind Hurricane Katrina (2005). 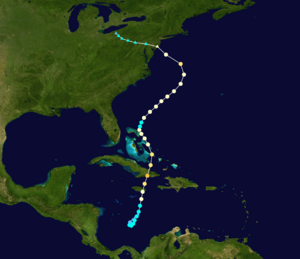 On October 19, a tropical wave was moving westward through the eastern Caribbean Sea. It had an extended low pressure area. It was expected to become better organized. On October 20, the system became better organized as expected. The National Hurricane Center (NHC) reported that it had a high potential for it to become a tropical cyclone within 48 hours. The next day, thunderstorms were small. Although, barometric pressure in the area remained low. Because of this, the system had potential for development. The thunderstorms got bigger, while the system slowed and eventually stopped moving. At 1500 UTC on October 22, the NHC gave out advisories on Tropical Depression Eighteen. The NHC reported that the storm was 320 mi (515 km) south of Kingston, Jamaica.

When the tropical depression formed, it was in an area of weak steering currents. This was located south of a ridge extending eastward from the Gulf of Mexico. The system was in an area favorable for strengthening. Late on October 22, a Hurricane Hunters flight found winds of 40 mph (64 km/h) in a rainband. This made NHC to upgrade the depression to Tropical Storm Sandy. Because of the moist atmosphere, the storm got better organized. Early on October 24, an eye began to develop. By that time, Sandy was moving slowly northward. At 11:00 am EDT (1500 UTC) on October 24, the NHC upgraded Sandy to hurricane status. This was because the Hurricane Hunters found winds of 99 mph (159 km/h). At the time, Sandy was located about 65 miles (105 km) south of Kingston, Jamaica. 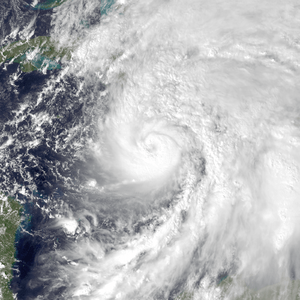 Sandy made landfall near Kingston at 3:00 p.m EDT (1900 UTC) on October 24. It had winds of about 80 mph (130 km/h). Before making its second landfall, Sandy got stronger and became a Category 2 hurricane on the Saffir-Simpson scale with 110 mph (175 km/h). At 1:25 am EDT (0525 UTC), Sandy made landfall in Cuba just west of Santiago de Cuba. When it made landfall in Cuba, Sandy had a visible eye of over 23 miles (37 km) in diameter. At the time, winds reached 135 mph (216 km/h). While over land, the storm weakened and the eye was no longer visible. After Sandy left Cuba, dry air and increasing shear caused the storm to be disorganized. A mid-level low over Florida turned the hurricane toward the north-northwest. By early on October 26, most of the storm was to the north of the center. This caused the storm to get larger. By the next day, the NHC reported that Sandy was starting to become more of a hybrid cyclone. On October 27, Sandy weakened to a tropical storm. A few hours later, it got stronger and became a Category 1 hurricane again.

At 11:15 a.m. EDT (1515 UTC) on October 26, the Bermuda Weather Service issued a tropical storm watch for Bermuda. This was because of the size of the storm and its possible effect on the island. 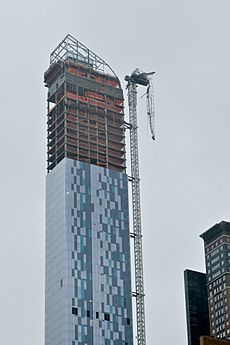 A crane in Manhattan, dangling dangerously 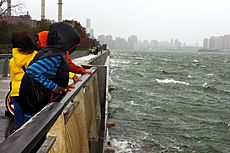 The East River, shown from Manhattan's East River Park, had already swollen to its bank by 11:00 a.m. on October 29th 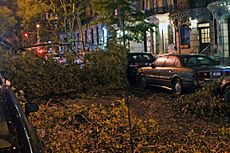 Many public schools on the Treasure Coast and in Palm Beach County, Florida were closed for Friday October 26. FEMA announced that they will monitor Sandy and help those in need.

In New York City, officials activated the city's coastal emergency plan. The subways closed. There were also evacuations for residents in areas where Hurricane Irene made landfall in August 2011. Mayor Michael Bloomberg said that some residents should prepare to evacuate. New York Governor Andrew Cuomo declared a state of emergency for every county in the state. On Long Island, Suffolk County officials ordered a mandatory evacuation of Fire Island residents. Cuomo went on to declared that Hurricane Sandy had been “more impactful” than Hurricane Katrina.

The Canadian Hurricane Centre issued its first statement of Sandy on October 25, 2012. One model suggested that Sandy would make a landfall in the East Coast of the United States, possibly affecting Southern Ontario.

At least 253 people were confirmed killed across the United States, the Caribbean, Canada, and the Bahamas, as a result of the storm. The New York City Subway was shut down for days, and parts of it for months. Large areas lost electric power distribution for days. Thousands of houses were damaged by wind and flood, and hundreds burned because firefighters could not reach them.

All content from Kiddle encyclopedia articles (including the article images and facts) can be freely used under Attribution-ShareAlike license, unless stated otherwise. Cite this article:
Hurricane Sandy (2012) Facts for Kids. Kiddle Encyclopedia.