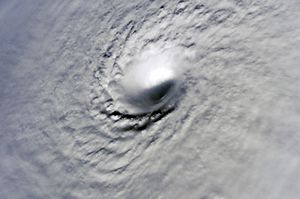 Image of the eye of Hurricane Wilma.

The eye is an area of calm weather in the center of strong tropical cyclones. The cyclone's lowest barometric pressure occurs in the eye. It is usually circular and range between 30 and 65 km (20 to 40 mi) in diameter, though smaller and larger eyes can occur.

The region surrounding the eye is the eyewall, where the worst weather is seen in a cyclone. These have strong winds, lots of rain and lots of cloud. There are also outer bands, which surround the cyclone, which forms the greatest part of the storm. These have winds so strong they can even form other tornadoes.

All content from Kiddle encyclopedia articles (including the article images and facts) can be freely used under Attribution-ShareAlike license, unless stated otherwise. Cite this article:
Eye (cyclone) Facts for Kids. Kiddle Encyclopedia.