Kids Encyclopedia Facts
For other places with the same name and other uses, see Fire Island (disambiguation).

Fire Island is the large center island of the outer barrier islands parallel to the south shore of Long Island, New York. In 2012, Hurricane Sandy once again divided Fire Island into two islands. Together, these two islands are approximately 31 miles (50 km) long and vary between 520 and 1,310 feet (160 and 400 m) wide. Fire Island is part of Suffolk County. It lies within the towns of Babylon, Islip, and Brookhaven, containing two villages and a number of hamlets. All parts of the island not within village limits are part of the Fire Island census-designated place (CDP), which had a permanent population of 292 at the 2010 census, though that expands to thousands of residents and tourists during the summer months.

Fire Island lies an average of 3.9 miles (6.2 kilometres) off the south shore of Long Island, but nearly touches it along the east end. It is separated from Long Island by Great South Bay, which spans interconnected bays along Long Island: Patchogue Bay, Bellport Bay, Narrow Bay, and Moriches Bay. The island is accessible by automobile near each end: via Robert Moses Causeway on its western end, and by William Floyd Parkway (Suffolk County Road 46) near its eastern end. Cross-bay ferries connect to over 10 points in between. Motor vehicles are not permitted on the rest of the island, except for utility, construction and emergency access and with limited beach-driving permits in winter. The island and its resort towns are accessible by boat, seaplane and a number of ferries, which depart from Bay Shore (Fire Island Ferries), Sayville, and Patchogue.

The physical attributes of the island have changed over time and they continue to change. At one point it stretched more than 60 miles (97 km) from Jones Beach Island to Southampton.

Around 1683, Fire Island Inlet broke through, separating it from Jones Beach Island.

The Fire Island Inlet grew to 9 miles (14 km) in width before receding. The Fire Island Lighthouse was built in 1858, right on the inlet, but Fire Island's western terminus at Democrat Point has steadily moved west so that the lighthouse today is 6 miles (10 km) from the inlet.

Fire Island separated from Southampton in a 1931 Nor'easter when Moriches Inlet broke through. However, this was expected. The inlet widened on September 21, 1938. Moriches Inlet and efforts by local communities east of Fire Island to protect their beach front with jetties have led to an interruption in the longshore drift of sand going from east to west and is blamed for erosion of the Fire Island beachfront. Between these major breaks there have been reports over the years of at least six inlets that broke through the island but have since disappeared. 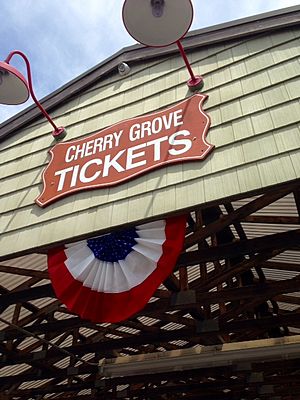 Entrance to board the ferry to Cherry Grove, Fire Island

The origin of Fire Island's name is not certain. It is believed its Native American name was Sictem Hackey, which translated to "Land of the Secatogues". The Secatogues were a tribe in the area of the current town of Islip. It was part of what was also called the "Seal Islands".

The name of Fire Island first appeared on a deed in 1789.

Historian Richard Bayles suggested that the name derives from a misinterpretation or corruption of the Dutch word vijf ("five"), or in another version vier ("four"), referring to the number of islands near the Fire Island inlet. At times histories have referred to it in the plural, as "Fire Islands", because of the inlet breaks.

Other versions say the island derived its name from fires built on the sea's edge by Native Americans or by pirates to lure unsuspecting ships into the sandbars. Some say it is how portions of the island look to be on fire from sea in autumn. Yet another version says it comes from the rash caused by poison ivy on the island. 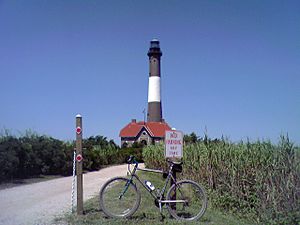 William "Tangier" Smith held title to the entire island in the 17th century, under a royal patent from Thomas Dongan. The remnants of Smith's Manor of St. George are open to the public in Shirley, New York.

A 2009 beach renourishment program was credited with saving the island from the full effects of Hurricane Sandy in 2012.

In the winter and spring of 2009, a beach renourishment project was undertaken on Fire Island, with the cooperation of the National Park Service, the U.S. Army Corps of Engineers, the Towns of Brookhaven and Islip, and Fire Island residents. The renourishment program involved dredging sand from an offshore borrow area, pumping it onto the beach and shaping the sand into an approved beach face and dune template in front of the communities of Corneille Estates, Davis Park, Dunewood, Fair Harbor, Fire Island Pines, Fire Island Summer Club, Lonelyville, Ocean Bay Park, Ocean Beach, Saltaire, and Seaview. Fire Islanders agreed to a significant property tax increase to help pay for the project, which was estimated to cost between $23 and $25 million ($6,020 per housing unit), including the cost of environmental monitoring, and was expected to add 1,400,000 cubic meters (1,800,000 cubic yards) of sand in front of the participating communities. The Towns of Brookhaven and Islip, in which the communities are located, issued bonds to pay for the project, backed by the new taxes levied by community Erosion Control Taxing Districts.

The island was heavily damaged in the high tides associated with Hurricane Sandy in 2012 including three breaches around Smith Point County Park on the sparsely populated east end of the island. The biggest breach (and politically most difficult one to deal with because it is in a wilderness area) is at Old Inlet in the Otis Pike Wilderness Area just west of Smith Point County Park. Old Inlet is at the site of previous breaches (which have come and gone on their own) was 108 feet wide after the storm on the south end and 1,171 feet on February 28, 2013. Officials have been debating whether to close the breach and let nature take its course as it has been flushing out the Great South Bay and improving water quality. However residents of the bay front communities noted increased flooding after the storm. This flooding was later found to be the result of several nor'easters and unrelated to the breaches. As of 2015[update], the breach remained open. Officials have moved to close the other two breaches which are on either side of Moriches Inlet—one in Cupsogue County Park and the other one being in Smith Point County Park.

Reports indicated that 80 percent of the homes particularly those on the east end were flooded and 90 homes were completely destroyed. The storm also tore away about 75 feet of the dune coastline. But Fire Island was not hit as hard as other areas and most of the 4,500 homes on the island survived even if damaged. Officials credited the dune replenishment program with helping to spare the island.

A memorial to TWA 800 is located on the eastern end at Smith Point County Park near where the airplane crashed at sea.

Following are the locations on the island. Townships and communities are listed from west to east. 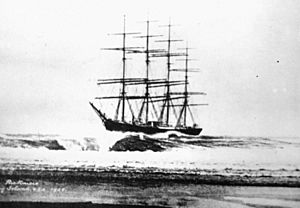 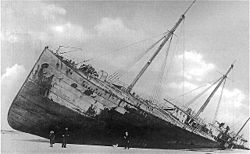 The world's first true tanker, the Glückauf, stranded on March 23/24, 1893 in heavy fog at Blue Point Beach on Fire Island

Other small islands around Fire Island

The following are associated islands in the Fire Island National Seashore Jurisdiction, from west to east:

Fire Island's population varies seasonally. There are few residents in winter months, with the population rising in the late spring to early fall.

Housing is mostly stick-built bungalow-style with generous helpings of bamboo. Some are beachfront, built on the dunes of the Atlantic Ocean, while others are on boardwalks or concrete walks, like a miniaturized city. For year-round residents, there are schools, churches, shops and even a school bus service to Long Island via an off-road modified school bus.

The quiet villages on Fire Island provide solitude, while the larger towns like Ocean Beach and Cherry Grove provide a more social atmosphere with clubs, bars and open air dining. Two of these hamlets, Fire Island Pines and Cherry Grove, are destinations for LGBT vacationers.

The incorporated villages of Ocean Beach and Saltaire within Fire Island National Seashore are car-free during the summer tourist season (Memorial Day through Labor Day) and permit only pedestrian and bicycle traffic (during certain hours only in Ocean Beach). For off-season use, there are a limited number of driving permits for year-round residents and contractors. The hamlet of Davis Park allows no vehicles or bicycles year-round.

There were 138 households on Fire Island, out of which 25.4% had children under the age of 18 living with them, 48.6% were married couples living together, 2.2% had a female householder with no husband present, and 44.2% were non-families. 34.8% of all households were made up of individuals and 10.1% had someone living alone who was 65 years of age or older. The average household size was 2.20 and the average family size was 2.90.

After the Manhattan theater community began staying on Fire Island during the 1920s, the island had numerous summer celebrity residents.

All content from Kiddle encyclopedia articles (including the article images and facts) can be freely used under Attribution-ShareAlike license, unless stated otherwise. Cite this article:
Fire Island Facts for Kids. Kiddle Encyclopedia.