Bay Shore is a hamlet and census-designated place (CDP) in the Town of Islip, Suffolk County, New York, United States. It is situated on the South Shore of Long Island, adjoining the Great South Bay. In 2008, Bay Shore celebrated the 300th anniversary of the purchase of the land from the Secatogue Native Americans. The population of the CDP was 26,337 at the time of the 2010 census.

Bay Shore is one of the older hamlets on Long Island. Sagtikos Manor, located in West Bay Shore, was built around 1697. It was used as a British armed forces headquarters, at the time of the Battle of Long Island during the Revolutionary War. President Washington stayed at the manor during his tour of Long Island in 1790. 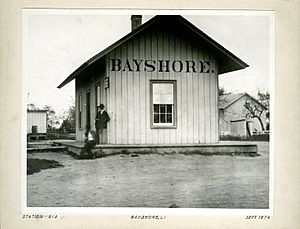 The land that would become Bay Shore proper was purchased from the Secatogue Native Americans in 1708 by local school teacher John Mowbray for "several eel spears".

The hamlet's name has changed over time: Early European settlers referred to the area first as Penataquit and later as Awixa; both were names used by the Native American Secatogue tribe. For reasons never documented, the name was changed in the early 19th century to Sodom. In 1842 there was a further name change to Mechanicsville, then a return in 1849 to Penataquit. The name Penataquit proved unpopular because it was difficult to spell. The name of the hamlet and post office was changed to Bay Shore in 1868.

Bay Shore became renowned in the late 19th century for its shopping district and resorts. The rural hamlet became popular with affluent New Yorkers looking to escape the city to white sand beaches of the Great South Bay and the fishing villages of Fire Island. It was a tourist spot on weekends and during the summer, in large part because the newly built Long Island Rail Road enabled easy access from New York City. During World War I it became the headquarters of the First Yale Unit, a United States Naval Air Reserve unit.

The population of Bay Shore increased significantly after World War II: from the mid-1950s through mid-1960s, a variety of housing developments were constructed on farms and unused woodlands. Those developments were settled largely by working and middle class first-time home buyers from New York City.

Despite strains on the community brought on by sudden, substantial growth, the hamlet remained sound. Main Street continued to be one of the region's most popular shopping destinations.

Bay Shore suffered a decline beginning in the late 1970s. Without a local government, residents were unable to make decisions that were instead left to the Town of Islip and Suffolk County. The population density and demographics shifted when rezoning permitted businesses, rental properties and multi-family dwellings where previously only single-family houses had been allowed. Many Main Street storefronts became dilapidated or vacant. The Cortland Hotel, along with other historic sites, was closed, the parks were unkempt, and many residents relocated. Construction of the South Shore Mall (currently Westfield South Shore) two miles north of Main Street took business away from the small businesses on Main Street. Deinstitutionalization caused psychiatric patients of the nearby Pilgrim State Hospital to be hastily relocated to rental housing downtown, often without sufficient professional support. With the opening of the county's social services "mini-center" on Union Boulevard, many residents witnessed an increase in crime, as indigents began wandering the streets and sleeping in public spaces and parks. Homes, businesses and restaurants on the waterfront fared better, partly because it's an embarkation point for ferries to beaches on Fire Island.

Restoration and the hamlet today

Work to restore Bay Shore has been ongoing since the 1980s. Upscale townhouses and condominiums were built in gated communities on the grounds of old estates. The former Bay Shore Theater and one-time opera house was renovated and expanded into a YMCA. The redevelopment of Main Street is ongoing; efforts include new sidewalks, antique-style streetlights, new landscaping and restored parks. Main Street has regained much of its popularity. There are many attractive new restaurants, clothing boutiques and other stores and offices. The Bay Shore Beautification Society transformed an empty lot on Main Street into a meditation garden that has since been recognized for its excellent design.

A US battleship was to have been placed at the Bay Shore Marina. However, the water was deemed too shallow, and instead a decommissioned WWII torpedo was converted into a monument. The aging bulkhead and other dock structures at the marina were rebuilt. Over the summer of 2010, a new waterpark was built at the marina with a renovated bath house and new landscaping.

The Bay Shore High School underwent an extensive renovation and an expansion from 2005 through 2008. The project has been noted for its close attention to architectural and historic detail.

Abandoned department stores at the Gardiner Manor Mall were razed to make new use of the property. Most of the old mall and adjacent buildings were replaced by new commercial and retail spaces, including a Lowe's home improvement center, a Target and a BMW dealership.

In 2008 and 2009 new condominiums replaced dilapidated housing next to the train station. Additionally, a pedestrian bridge was built over the tracks, and the old underground tunnel between platforms was closed.

South of Main Street, also known as Montauk Highway, is an area of mansions and other large homes, built from the 1880s through the 1920s.

Though many architecturally impressive homes from that period remain, others have been subdivided, demolished or converted to commercial properties.

West of downtown, extending into neighboring Brightwaters, is the best-known section of extant, older mansions and large houses. The private association, known as O-Conee Estates, also lies just west of downtown Bay Shore, and is considered the town's most prominent and impressive remaining estate section. The association encompasses three parallel lanes, Garner Lane, Lawrence Lane, and West Lane, all lying south of Montauk Highway. During the early to mid-nineteenth century, the site of the association was occupied by the summer estates of Francis C. Lawrance and Thomas Garner, whose son, William Garner, would later become the vice commodore of the New York Yacht Club. The Vitagraph Studios, one of the largest studios of the silent era, had a branch studio located at 94 Fourth Avenue in Bay Shore and operated in 1916.

At the east end of the hamlet (mainly on Awixa, Penataquit and Montgomery avenues) are the W.H. Wray House , the Hulse House and the Gustavino Tile House, among others. There was the now-razed J.P. Morgan Estate, a large white mansion owned by the Johnson & Johnson family. This peninsula was originally named Thurber's Neck and subsequently renamed Penataquit Point.

Bay Shore is accessible by major roads on Long Island such as:

Bay Shore is approximately 12 miles (19 km) from Islip MacArthur Airport, commonly referred to as Long Island MacArthur Airport, in Ronkonkoma. Because there are fewer flights to choose from, most Bay Shore residents (like other Long Islanders) travel to larger and more accommodative airports for most of their air travel, such as John F. Kennedy International Airport and LaGuardia Airport, both in the borough of Queens in New York City, or to Newark International Airport in Newark, New Jersey.

Bay Shore is a stop on the Montauk Branch of the Long Island Rail Road. LIRR trains travel westward toward Babylon and New York City, and eastward toward Montauk. The Bay Shore stop is a popular stop for visitors traveling to and from Fire Island.

Bay Shore has terminals for the Ferries to Fire Island, serving Atlantique, Dunewood, Fair Harbor, Kismet, Ocean Bay Park, Ocean Beach, Saltaire, and Seaview, and smaller hamlets. They are located at the southernmost end of Maple Avenue. Some daily ferries to Atlantique also make a stop at the Bay Shore Marina, which is across the canal from the Maple Avenue ferries.

The Village of Brightwaters is west of Bay Shore, and east of West Bay Shore and south of a portion of the Bay Shore CDP; The Great South Bay is to the south. The hamlet separates Bay Shore proper from West Bay Shore.

There were 9,064 households out of which 31.3% had children under the age of 18 living with them, 42.7% were headed by married couples living together, 17.9% had a female householder with no husband present, and 32.9% were non-families. 27.0% of all households were made up of individuals, and 11.3% were individuals 65 years of age or older living alone. The average household size was 2.88 and the average family size was 3.45.

The Bay Shore UFSD serves most of Bay Shore, West Bay Shore, and North Bay Shore, with some portions served by neighboring school districts. Bay Shore School District colors are Maroon and White and the mascot is the Marauder.

All content from Kiddle encyclopedia articles (including the article images and facts) can be freely used under Attribution-ShareAlike license, unless stated otherwise. Cite this article:
Bay Shore, New York Facts for Kids. Kiddle Encyclopedia.