Joseph William Namath (born May 31, 1943), nicknamed "Broadway Joe", is a former American football quarterback and actor. He played college football for the University of Alabama under coach Paul "Bear" Bryant from 1962 to 1964, and professional football in the American Football League (AFL) and National Football League (NFL) during the 1960s and 1970s. Namath was an AFL icon and played for that league's New York Jets for most of his professional football career. He finished his career with the Los Angeles Rams. He was elected to the Pro Football Hall of Fame in 1985.

Statistics fail to give a true impression Namath's enduring influence on the game of professional football. He retired after playing 143 games over 13 years in the AFL and NFL, including playoffs. Due mainly to chronic injuries that undermined his career at its peak. He played for three division champions (the 1968 and 1969 AFL East Champion Jets and the 1977 NFC West Champion Rams), earned one league championship (1968 AFL Championship), and one Super Bowl victory (Super Bowl III).

In 1999, he was ranked number 96 on The Sporting News list of the 100 Greatest Football Players, the only player on the list to have spent a majority of his career with the Jets. In his 1975 autobiography, Alabama head coach Bryant called Namath the most natural athlete he had ever coached.

Namath is known for boldly guaranteeing a Jets' victory over Don Shula's NFL Baltimore Colts in Super Bowl III (1969), then making good on his prediction with a 16–7 upset (the win remains the Jets' only NFL championship). Already a celebrity, he was now established as a sports icon. He also went into successful endorsement deals and as a nightclub owner, talk show host, pioneering advertising spokesman, theater, motion picture, television actor, and sports broadcaster. He remained a highly recognizable figure in the media and sports worlds nearly half a century after his identity in the public mind. 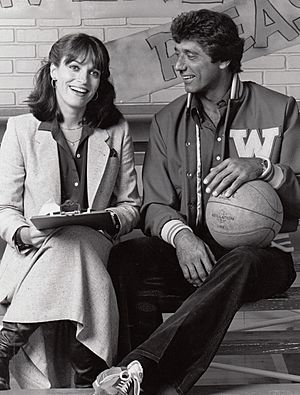 Gwynne Gilford and Namath on The Waverly Wonders in 1978

Namath was born and raised in [[Beaver Falls, Pennsylvania]. He was the youngest of four sons, with an older adopted sister.

Namath excelled in all sports at Beaver Falls High School and was a standout quarterback in football, guard in basketball, and outfielder in baseball. In an age when dunks were uncommon in high school basketball, Namath regularly dunked in games. Coached by Larry Bruno at Beaver Falls, Namath's football team won the WPIAL Class AA championship with a 9–0 record in 1960. Coach Bruno later presented Namath to the Pro Football Hall of Fame in Canton.

Upon graduation from high school in 1961, he received offers from several Major League Baseball teams, including the Yankees, Indians, Reds, Pirates, and Phillies, but football prevailed. Namath told interviewers that he wanted to sign with the Pirates and play baseball like his idol, Roberto Clemente, but elected to play football because his mother wanted him to get a college education.

He graduated from college at age 64 in 2007, after he returned to the University of Alabama about forty years after he left early in order to pursue a career in professional football. He successfully finished a 30-hour external program bachelor of arts degree in interdisciplinary studies.

While taking a voice class in 1983, Namath met Deborah Mays, an aspiring actress. They married in 1984. The longtime bachelor became a dedicated family man when the couple had two children. The couple divorced in 2000, with the children living in Florida with their father.

On June 6, 2018, Namath threw out the first pitch at a Chicago Cubs Game at Wrigley field. The pitch was caught by Joe Maddon, the Cubs manager as of 2018. Maddon idolized Namath as a child. This was Namath's first time at Wrigley Field. 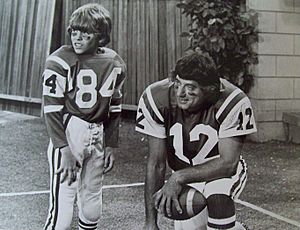 Namath also appeared in television advertisements both during and after his playing career, most notably for Ovaltine milk flavoring, Noxzema shaving cream (in which he was shaved by a then-unknown Farrah Fawcett). All of these commercials contributed to his becoming a pop-culture icon. He has appeared in advertising as recently as 2014, in a DirectTV commercial.

Namath continues to serve as an unofficial spokesman and goodwill ambassador for the Jets. In 2011, Namath was representing Topps and promoting a "Super Bowl Legends" contest, appearing on its behalf on the Late Show with David Letterman.

On June 2, 2013, Namath was the guest speaker at the Pro Football Hall of Fame, unveiling the Canton, Ohio museum's $27 million expansion and renovation plan.

In November 2006, the biography Namath by Mark Kriegel appeared, reaching the New York Times extended bestseller list (number 23). In conjunction with its release, Namath was interviewed for the November 19, 2006, edition of CBS' 60 Minutes.

A recent documentary about Namath's hometown of Beaver Falls, Pennsylvania, includes a segment on Namath and why the city has celebrated its ties to him. In 2009, 40 years after winning Super Bowl III, he presented the Vince Lombardi Trophy to the Pittsburgh Steelers who won Super Bowl XLIII. NFL Productions also produced a two-hour long television biography in its A Football Life series

All content from Kiddle encyclopedia articles (including the article images and facts) can be freely used under Attribution-ShareAlike license, unless stated otherwise. Cite this article:
Joe Namath Facts for Kids. Kiddle Encyclopedia.