Beaver Falls is a city in Beaver County, Pennsylvania, United States. The population was 9,005 at the 2020 census. It is located 31 miles (50 km) northwest of Pittsburgh, and on the Beaver River, six miles (9 km) north of its confluence with the Ohio River.

Originally called Brighton, Beaver Falls was chartered as a borough in 1868. It adopted the commission form of government in 1913.

In the 1870s, Beaver Falls was home to a Chinatown and had as many as 200 Chinese residents.

Travellers would often stop in Beaver Falls while transversing Western Pennsylvania, since there were many modes of transportation through the area (railroad, highway, canal). The city was also linked to Ellwood City in 1914 by the Pittsburgh, Harmony, Butler and New Castle Railway, an interurban trolley line. The line closed on 15 June 1931.

The city is best known in fiction as the setting of the television situation comedy Mr. Belvedere.

On May 31, 1985, an F3 tornado hit just north of the city as it went across northern portions of Beaver County, as part of the 1985 United States-Canadian tornado outbreak. Geneva College is located in the College Hill neighborhood on the north side of the city. The world's first recorded college basketball game occurred in the city on April 8, 1893 when the intramural team from Geneva College defeated the New Brighton YMCA.

The population declined nearly 50% between 1940 and 2000, which is attributed mostly to its central location in the Rust Belt. Several manufacturing plants provided significant employment for residents in the twentieth century. Like most rust belt cities, Beaver Falls has suffered a fair amount of economic malaise due to the decline in the steel-making capacity in the region. 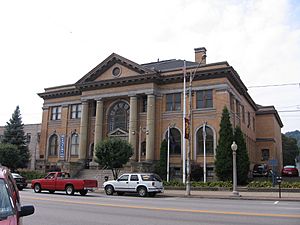 A view of Downtown Beaver Falls in 2013.

The closest airport to the city is Beaver County Airport. Though located in Allegheny County, Pittsburgh International Airport is within close proximity of Beaver Falls, and is easily accessible by way of I-376 (former PA 60).

Major freight haulers CSX Transportation and the Norfolk Southern Railway (NS) both have mainlines running through Beaver Falls. NS also has a subsidiary line along the east side of Beaver River. Amtrak's Capitol Limited passes through the city via NS tracks without stopping. Amtrak's Broadway Limited and successor Three Rivers also passed through town until 2005.

Though not used for transporting goods and materials, the Beaver River is a navigable waterway for boating.

All content from Kiddle encyclopedia articles (including the article images and facts) can be freely used under Attribution-ShareAlike license, unless stated otherwise. Cite this article:
Beaver Falls, Pennsylvania Facts for Kids. Kiddle Encyclopedia.