The shallow river has been made navigable upstream from Pittsburgh to East Brady by a series of locks and dams constructed in the early 20th century. A 24-mile long portion of the upper river in Warren and McKean counties of Pennsylvania and Cattaraugus County in New York is the Allegheny Reservoir also known as Lake Kinzua, created by the erection of the Kinzua Dam in 1965 for flood control.

The name of the river comes from one of a number of Delaware Indian phrases which are homophones of the English name, with varying translations. 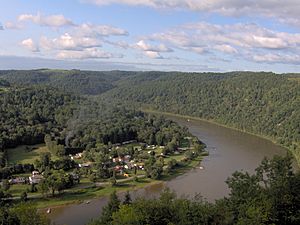 Much of the Allegheny River's course is through hilly woodlands.

The Allegheny River rises in north central Pennsylvania, on Cobb Hill in Alleghany Township in north central Potter County, 8 miles (16 km) south of the New York border and a few miles northwest of the eastern triple divide. The stream flows south and passes under Pennsylvania Route 49 11 miles northeast of Coudersport where a historical marker that declares the start of the river is located. Cobb Hill is about a mile north. The stream flows southwest paralleling Route 49 to Coudersport. It continues west to Port Allegany then turns north into western New York, looping westward across southern Cattaraugus County for approximately 30 miles (48 km), past Portville, Olean, Allegany and Salamanca and flowing through Seneca Indian Nation lands close to the northern boundary of Allegany State Park before re-entering northwestern Pennsylvania within the Allegheny Reservoir just east of the Warren-McKean county line, approx. 10 miles (32 km) northeast of Warren.

It flows in a broad zigzag course generally southwest across Western Pennsylvania; first flowing southwest past Warren, Tidioute, Tionesta, Oil City, and Franklin, forming much of the northwestern boundary of Allegheny National Forest. South of Franklin it turns southeast across Clarion County in a meandering course, then turns again southwest across Armstrong County, flowing past Kittanning, Ford City, Clinton, and Freeport. 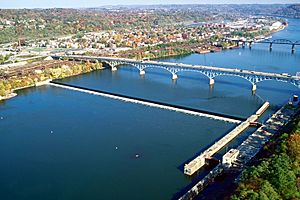 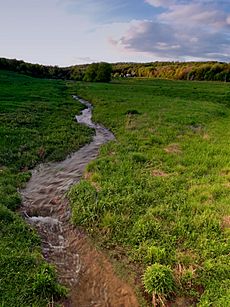 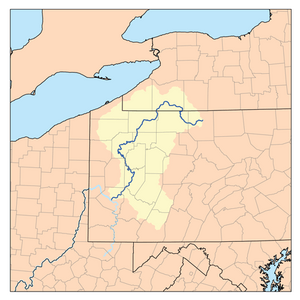 The Allegheny River drainage basin covers parts of New York and Pennsylvania in the United States.

The river is approximately 325 miles (523 km) long, running through the U.S. states of New York and Pennsylvania. It drains a rural dissected plateau of 11,580 square miles (30,000 km2) in the northern Allegheny Plateau, providing the northeastern most drainage in the watershed of the Mississippi River. Its tributaries reach to within 8 miles (13 km) of Lake Erie in southwestern New York.

Water from the Allegheny River eventually flows into the Gulf of Mexico via the Ohio and Mississippi rivers.

The Allegheny Valley has been one of the most productive areas of fossil fuel extraction in United States history, with its extensive deposits of coal, petroleum, and natural gas.

In its upper reaches, the Allegheny River is joined from the south by Potato Creek 1.7 miles (2.7 km) downstream of Coryville, Pennsylvania and from the north by Olean Creek at Olean, New York. Tunungwant "Tuna" Creek joins the river from the south in Carrollton, New York (flowing north from Bradford, Pennsylvania); the Great Valley Creek and Little Valley Creek join the river from the north at Salamanca, New York before becoming the Allegheny Reservoir. 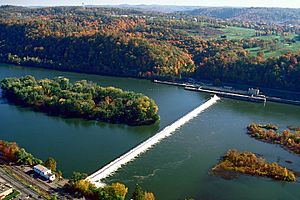 The eastern part of Allegheny Islands State Park and the C. W. Bill Young Lock and Dam (No. 3) on the Allegheny River

Several locks were built in the early 20th century to make the Allegheny River navigable for 72 miles upstream from Pittsburgh to East Brady.

The Allegheny River has eight locks and fixed-crest dams numbered two through nine: Allegheny River Lock and Dam No. 2, 3, 4, 5, 6, 7, 8, 9 which form corresponding reservoirs.

The river is also impounded by the Kinzua Dam in northwestern Pennsylvania, resulting in the Allegheny Reservoir also known as Kinzua Lake and Lake Perfidy among the Seneca. The Seneca Pumped Storage Generating Station is associated with Kinzua Dam.

Numerous bridges and tunnels span the river throughout its course. The Allegheny River Tunnel, utilized by Pittsburgh Light Rail, went into service in 2012.

All content from Kiddle encyclopedia articles (including the article images and facts) can be freely used under Attribution-ShareAlike license, unless stated otherwise. Cite this article:
Allegheny River Facts for Kids. Kiddle Encyclopedia.