Westmoreland County is a county located in the U.S. state of Pennsylvania. At the 2010 census, the population was 365,169. The county seat is Greensburg. Formed from, successively, Lancaster, Northumberland, and later Bedford Counties, Westmoreland County was founded on February 26, 1773, and was the first county in the colony of Pennsylvania whose entire territorial boundary was located west of the Allegheny Mountains. Westmoreland County originally included the present-day counties of Fayette, Washington, Greene, and parts of Beaver, Allegheny, Indiana, and Armstrong counties. It is named after Westmorland, a historic county of England.

Westmoreland County is included in the Pittsburgh Metropolitan Statistical Area. 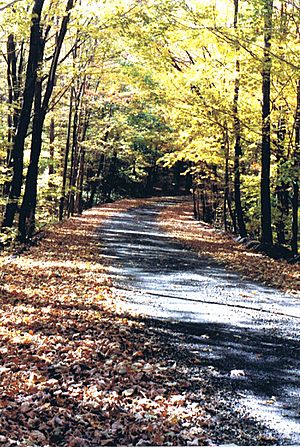 Autumn on a small state road near the Pennsylvania Turnpike in Laurel Mountains.

There are four Pennsylvania state parks in Westmoreland County. 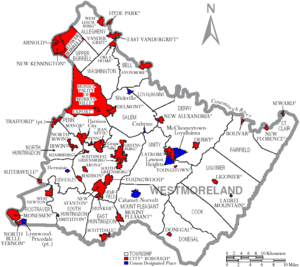 Under Pennsylvania law, there are four types of incorporated municipalities: cities, boroughs, townships, and, in at most two cases, towns. The following cities, boroughs and townships are located in Westmoreland County:

The population ranking of the following table is based on the 2010 census of Westmoreland County.

A major coal strike occurred in the county in the winter of 1910–11.

Volkswagen's Westmoreland plant near New Stanton in Westmoreland County was the first foreign-owned factory mass-producing automobiles in the U.S. It operated from 1978 to 1988. 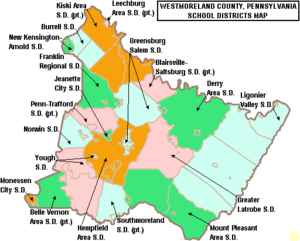 See also: List of people from the Pittsburgh metropolitan area

All content from Kiddle encyclopedia articles (including the article images and facts) can be freely used under Attribution-ShareAlike license, unless stated otherwise. Cite this article:
Westmoreland County, Pennsylvania Facts for Kids. Kiddle Encyclopedia.