There are also four Derry Townships in Pennsylvania.

Derry is a borough in Westmoreland County in the Commonwealth of Pennsylvania, 45 miles (72 km) east of Pittsburgh. The Borough of Derry, consisting of the town area, should not be confused with Derry Township, which is a separate municipality surrounding the borough. The population was 2,540 at the 2020 census.

Derry, originally known as Derry Station, was created in 1852 to serve the Pennsylvania Railroad. It was named after the village on PA Route 982 originally known as Derry and now known as New Derry (even though it is older than the community being discussed here). The original "Derry" in Westmoreland County, Pennsylvania was named after the city Derry in Northern Ireland, because the area’s first non-Indian inhabitants were Scotch-Irish.

Derry was ideally suited for major railroad facilities because of its ready access to water from McGee Run (essential in the era of steam locomotives) and because it sits atop a slight summit along the railroad right-of-way. In Derry's heyday in the late 1800s, it had four hotels, mainly to serve railroad workers, as well as a roundhouse for locomotive maintenance and a massive railroad yard. Derry was incorporated as a borough on October 22, 1881.

Also, Derry served as the terminal for Pittsburgh commuter trains until 1964, when the Pennsylvania Railroad ceased operating its commuter service. The annual Railroad Days Festival serves to remind residents of Derry's railroading heritage. 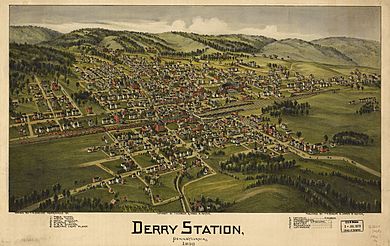 Bird's-eye view of Derry Station in 1900

Little remains of Derry's railroading boom, although some might notice an unused railroad right-of-way that extends from Derry westward to PA Route 981, running slightly north but parallel to the currently-used railroad tracks. This was an ill-fated project known as the Derry-Donohoe-Jeannette (DDJ) bypass, in which the Pennsylvania Railroad attempted to build a new main line that would avoid the curves and slopes of the existing main line, bypassing Latrobe and Greensburg. Construction of the bypass began in the 1920s, including a large trestle near Bradenville, but the new route was never completed.

Derry and Latrobe were also linked by the Westmoreland County Railway Company which was an interurban (long-distance trolley) operating from 1904 to 1932.

A helicopter crash into a crowd assembled for a festival at St. Joseph's Catholic Church in Derry killed eight people and injured 18 others on Labor Day, 1978. The railroad crossing in downtown Derry has also been the site of other fatal accidents.

Heraldry of the Crest

The center of the crest is adorned with St. George’s Cross. St. George was a martyr, one of the most famous in Christendom, and is noted for refusing many bribes and offerings to renounce his faith. He also gave all of his possessions and holdings to the poor.

The heart, in the upper left corner of the cross, is sectioned with a bar rising up that signifies love for God.

The lower part of the shield is draped with noble ermine as a back drop for the two charges that respectfully represent community values and Derry’s rich railroad heritage.

The railroad theme is carried on at the top of the design with a crest emblazoned with the borough’s name and establishment date.

The decorative foliage around the design is tinted blue for loyalty and gold for generosity. The tincture also represent the local school’s colors and the borough’s commitment to youth and education.

Finally, the lower banner motto resonates the strong foundation of community reserved for the families that call the borough home as well as an acknowledgement to the great country that the borough resides in.

Overall, the crest portraits a very noble ideal of community, heritage, charity and endless love for god in the face of danger.

The climate in this area is characterized by hot, humid summers and generally mild to cool winters. According to the Köppen Climate Classification system, Derry has a humid subtropical climate, abbreviated "Cfa" on climate maps.

All content from Kiddle encyclopedia articles (including the article images and facts) can be freely used under Attribution-ShareAlike license, unless stated otherwise. Cite this article:
Derry, Pennsylvania Facts for Kids. Kiddle Encyclopedia.