Latrobe is a city in Westmoreland County, Pennsylvania, in the United States and part of the Pittsburgh metropolitan area.

Latrobe is the home of Saint Vincent Archabbey, the Latrobe Brewery (the original brewer of Rolling Rock beer), and Saint Vincent College. Latrobe was the home of golfer Arnold Palmer. It was the childhood home of children's television personality Fred Rogers. The banana split was invented there by David Strickler in 1904. Latrobe is also home to the training camp of the Pittsburgh Steelers. Latrobe was long recognized as the site of the first professional American football game in 1895 until research proved otherwise.

In 1852, Oliver Barnes (a civil engineer for the Pennsylvania Railroad) laid out the plans for the community that was incorporated in 1854 as the Borough of Latrobe. Barnes named the town for his best friend and college classmate, Benjamin Latrobe, who was a civil engineer for the B&O Railroad. (His father, Benjamin Henry Latrobe, was the architect who rebuilt the United States Capitol in Washington, D.C. after the War of 1812.)

Its location along the route of the Pennsylvania Railroad helped Latrobe develop into a significant industrial hub. Latrobe was also served by the Ligonier Valley Railroad from 1877 to 1952.

In 1904, the banana split was invented in Latrobe by David Evans Strickler at Strickler's Drug Store.

Latrobe has two sites on the National Register of Historic Places within its city boundaries: 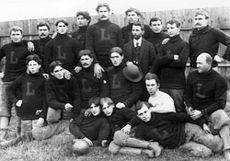 From 1895 until 1909, Latrobe was the home of the Latrobe Athletic Association, one of the earliest professional football teams. The team's quarterback, John Brallier, became the first football player to admit playing for money. In 1895 he accepted $10 and expenses to play for Latrobe in a 12-0 victory over the Jeannette Athletic Club. Brallier was thought to be the very first professional football player, until the 1960s. It was then, that documents surfaced showing that William "Pudge" Heffelfinger, a former three-time All-American from Yale, was employed to play guard for the Allegheny Athletic Association three years earlier. In 1897, Latrobe was the first football team to play a full season with a team composed entirely of professional players. In 1898 Latrobe and two players from their rivals, the Greensburg Athletic Association, formed the very first professional football all-star team for a game against the Duquesne Country and Athletic Club, to be played at Pittsburgh's Exposition Park. Duquesne went on to win the game 16-0. On November 18, 1905, Latrobe defeated the Canton Bulldogs, which later became a founding member, and two-time champion, of the National Football League, 6-0. 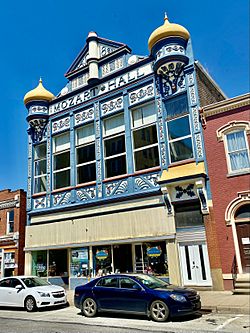 All content from Kiddle encyclopedia articles (including the article images and facts) can be freely used under Attribution-ShareAlike license, unless stated otherwise. Cite this article:
Latrobe, Pennsylvania Facts for Kids. Kiddle Encyclopedia.