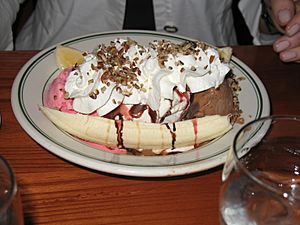 A banana split is a type of dessert. It is made with ice cream, sliced bananas, and usually toppings. The toppings often include flavored sauces, whipped cream, nuts, and most notably a cherry on top of the dessert.

One banana split has 893 calories.

All content from Kiddle encyclopedia articles (including the article images and facts) can be freely used under Attribution-ShareAlike license, unless stated otherwise. Cite this article:
Banana split Facts for Kids. Kiddle Encyclopedia.