Jeannette is a city in Westmoreland County, Pennsylvania, United States. Jeannette was founded in 1888. The city got its name from one of the original city fathers, who wished to honor his wife, Jeannette McLaughlin, by giving the new town her first name: Jeannette. The city celebrated its 125th anniversary in July 2013. The population was 9,654 according to the 2010 census.

According to the United States Census Bureau, the city has a total area of 2.4 square miles (6.2 km2).

Jeannette has two Catholic churches (Sacred Heart and Ascension Church) and also multiple Lutheran, Baptist and Presbyterian churches throughout the city. In 1943, the city went before the Supreme Court to defend an ordinance that banned distributing religious materials door to door. Several members of the Jehovah's Witnesses challenged the constitutionality of the law but were defeated in Douglas v. City of Jeannette.

It's a place well known for its restaurants, including "DeNunzio's," a famous Italian restaurant which has three locations (Latrobe, Jeannette, and Monroeville) and continues to gain popularity due to upgrades in the interior dining, settings, atmosphere and customer service. Also, "Mamma G's" was voted the top place in Jeannette for breakfast, "Persichetti's" is voted best fish sandwich and, voted best pizza is "Ricky's" handmade pizza.

Perhaps the oldest historical reference to the area that became Jeannette is the role the area played in the Pontiac War in 1763. The Bushy Run Battlefield marks the spot where Colonel Henry Boquet led the British and American troops to defeat the Indians in a battle on the 5th and 6 August that year. This victory is credited with helping to prevent the capture of Fort Pitt, and it served the purpose of reopening communication and supply lines. Today, this 200-acre (0.81 km2) historical landmark is the site of a museum, nature trails, picnic areas, and an annual reenactment of the Battle of Bushy Run. 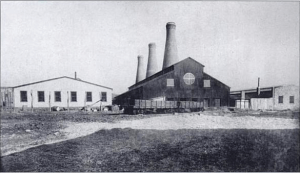 First incorporated as a borough on June 7, 1889, Jeannette earned the nickname as "the glass city" in recognition of the numerous glass plants founded in the area, with those factories contributing to the city's original stature as the first large manufacturing town in Westmoreland County. In fact, the impact of the glass industry was so significant that the city's name actually comes from Jeannette E. Hartupee McKee, the wife of H. Sellers McKee, a local industrialist who cofounded the Chambers and McKee Glass Works and was a member of the elite South Fork Fishing and Hunting Club of Johnstown Flood fame. Mckee and his partner J.A. Chambers also have the distinction of naming Jeannette's main street, Clay Avenue after their financial backer, Richard W. Clay. On January 1, 1938, Jeannette became a third class city with Attorney John M. OConnell as the first mayor.

At times, there were as many as 7 significant factories operating in the city of Jeannette including some of the most well known in the history of the glass industry. Names like Jeannette Glass; Fort Pitt Glass; the Pittsburgh Lamp, Brass and Glass Company; American-Saint Gobain, Westmoreland Glass; and others all supplied the country with everything from plate glass windows, to bottles, to milk glass, and much more for many decades. Some estimates over the years indicate that Jeannette once produced somewhere between 70-85% of the world's glass. Unfortunately, Jeannette's glass industry was one of the early United States industry victims of cheap, foreign competition that made it less expensive to produce glass overseas and today only two glass factories remain in the city.

Jeannette's manufacturing history doesn't end with the glass industry. Today's Elliott Company represents an evolution dating back to 1914 when William Swan Elliott moved his company to Jeannette. The Elliott Company, owned by the Carrier Corporation from 1957 until 1979 and by United Technologies Corporation until a 1987 buyout that returned the company to a privately owned status, only to become an Ebara Corporation subsidiary in 2000, has always had a solid reputation in the dynamo, turbine, and large rotating equipment industry. In 1952, the company produced the first diesel-engine turbocharger used in a racecar and subsequently built more than 40,000 more of them for other diesel applications. Throughout the 1970s, local residents routinely witnessed a revolving door of trains hauling parts into the plant on North 4th Street and hauling the huge turbine engines back down the tracks. Today, the Elliott Company is the city's largest employer. Jeannette is also the manufacturing home of Jensen Steam Engine Mfg. Co., Inc., which produces small working models of steam engines and turbines. The Jensen shop is only a few blocks from the Elliott plant.

All content from Kiddle encyclopedia articles (including the article images and facts) can be freely used under Attribution-ShareAlike license, unless stated otherwise. Cite this article:
Jeannette, Pennsylvania Facts for Kids. Kiddle Encyclopedia.