Jeep is a brand of American automobiles that is a division of FCA US LLC (formerly Chrysler Group, LLC), a wholly owned subsidiary of Fiat Chrysler Automobiles. Jeep has been a part of Chrysler since 1987, when Chrysler acquired the Jeep brand, along with remaining assets, from its previous owner: American Motors Corporation (AMC).

Jeep's current product range consists solely of sport utility vehicles and off-road vehicles, but has also included pickup trucks in the past. Some of Jeep's vehicles - such as the Grand Cherokee - reach into the luxury SUV segment, a market segment the Wagoneer is considered to have created. Jeep sold 1.4 million SUVs globally in 2016, up from 500,000 in 2008, two-thirds of which in North America, and was Fiat-Chrysler's best selling brand in the U.S. during the first half of 2017. In the U.S. alone, over 2400 dealerships hold franchise rights to sell Jeep-branded vehicles, and if Jeep were spun off into a separate company, it is estimated to be worth between $22 and $33.5 billion. 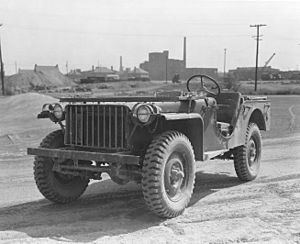 The original Jeep was the prototype Bantam BRC. Willys MB Jeeps went into production in 1941 specifically for the military. Arguably that makes them the oldest four-wheel drive mass-production vehicles now known as SUVs. The Jeep became the primary light 4-wheel-drive vehicle of the United States Army and the Allies during World War II. It remained so in the postwar period.

The first civilian models were produced in 1945. It inspired a number of other light utility vehicles, such as the Land Rover. Many Jeep variants serving similar military and civilian roles have since been designed in other nations. In 2007 Jeep began manufacturing crossover SUVs with its Compass and Patriot models. This led to the 2013 Jeep Cherokee midsize crossover.

All content from Kiddle encyclopedia articles (including the article images and facts) can be freely used under Attribution-ShareAlike license, unless stated otherwise. Cite this article:
Jeep Facts for Kids. Kiddle Encyclopedia.