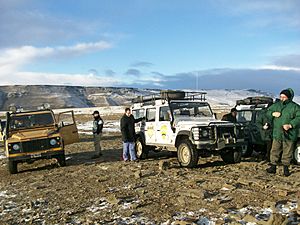 An off-road vehicle is generally any type of vehicle which can be used for driving on and off paved or gravel surface. Off-road vehicles generally have large tires with deep, open treads and a flexible suspension. Off-road vehicles should not be confused with off-highway vehicles. These are not designed to be used on highways and are capable of traveling cross-country over rough land, marsh, swamps, ice or snow.

Off-road vehicles have a large following because of their many uses and versatility. Several types of motorsports involve racing off-road vehicles. The three largest "4-wheel vehicle" off-road types of competitions are mud racing, desert racing, and rockcrawling. The most common use of these vehicles is for sight seeing in areas distant from paved roads. The use of higher clearance and higher traction vehicles allows access on trails and forest roads that have rough and low traction surfaces.

Rockcrawling is an extreme form of off road driving. Drivers use vehicles anywhere from stock to highly modified to overcome obstacles (usually rocks). In rock crawling, drivers drive highly modified four-wheel drive vehicles such as trucks, Jeeps, and "buggies" over very harsh terrain. Driving locations include boulders, mountain foothills, rock piles, mountain trails, etc. Rock crawling is about slow-speed, careful driving. Rock crawlers often drive up, down and across obstacles that would appear impassable. Such vehicles to rock climb are primarily 4x4s.

In the United States and elsewhere off-road vehicles should be ridden only on roads, trails and areas open to off-road travel. At the request of the United States Forest Service, Tread Lightly! created the "RIDE ON" program reminding off-roaders to “RIDE ON Designated Routes”. This was to prevent unregulated motor vehicle travel on public lands. Most US states and other Federal government agencies have similar laws and regulations to safeguard the environment. Tread Lightly!s message of traveling only on existing roads or trails is also designed to prevent social conflicts such as having entire areas closed to off-road travel.

All content from Kiddle encyclopedia articles (including the article images and facts) can be freely used under Attribution-ShareAlike license, unless stated otherwise. Cite this article:
Off-road vehicle Facts for Kids. Kiddle Encyclopedia.