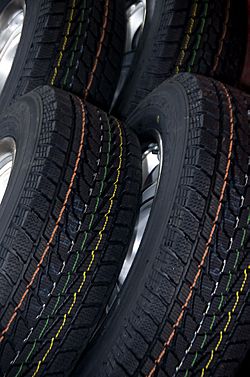 These tires have grooves in them for all-weather traction

Traction, or tractive force, is the force used to generate motion between a body and a surface. This is usually due to friction, though the use of shear force of the surface is also commonly used.

Traction is an important force to motor vehicles. Tires, usually made of rubber, depend on traction to move a vehicle forward. In manual transmission cars and trucks, a clutch is a friction device that connects the engine to the drivetrain of the vehicle. To work properly, the clutch must have traction.

All content from Kiddle encyclopedia articles (including the article images and facts) can be freely used under Attribution-ShareAlike license, unless stated otherwise. Cite this article:
Traction (engineering) Facts for Kids. Kiddle Encyclopedia.