American Motors Corporation (AMC) was an American automobile company formed by the merger of Nash-Kelvinator Corporation and Hudson Motor Car Company on 1 May 1954. At the time, it was the largest corporate merger in U.S. history.

AMC went on to compete with the U.S. Big Three—Ford, General Motors and Chrysler—with its small cars including the Rambler American, Hornet, Gremlin and Pacer; its intermediate and full-size cars including the AMC Ambassador, AMC Rebel, and AMC Matador; muscle cars including the Marlin, AMX and Javelin; and early four-wheel-drive variants of the Eagle, the U.S. market's first true crossover. 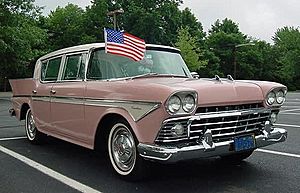 A letter to shareholders in 1959 claimed that the introduction of new compact cars by AMC's large domestic competitors (for the 1960 model year) "signals the end of big-car domination in the U.S." and that AMC predicts small-car sales in the U.S. may reach 3 million units by 1963.

American Motors was also beginning to experiment in non-gasoline powered automobiles. On April 1, 1959, AMC and Sonotone Corporation announced a joint research effort to consider producing an electric car that was to be powered by a "self-charging" battery.

After periods of intermittent but no success, Renault acquired a major interest in AMC in 1979—and the company was ultimately acquired by Chrysler in 1987.

All content from Kiddle encyclopedia articles (including the article images and facts) can be freely used under Attribution-ShareAlike license, unless stated otherwise. Cite this article:
American Motors Facts for Kids. Kiddle Encyclopedia.