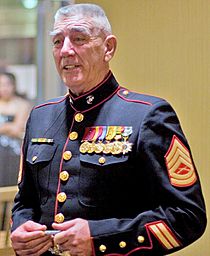 Ronald Lee Ermey (March 24, 1944 – April 15, 2018) was an American actor and voice actor. Ermey served with the United States Marine Corps in Vietnam and was retired in 1971. He was the voice of Sarge in Toy Story, Toy Story 2, and Toy Story 3. Ermey was born on March 24, 1944 in Emporia, Kansas. He was nominated for a Golden Globe Award for his role as Gunnery Sergeant Hartman in Full Metal Jacket.

Ermey was married to Nila Ermey from 1975 until his death in 2018; they had 4 children. Ermey retired as a Staff Sergeant but was later given the honorary rank of Gunnery Sergeant.

Ermey died on April 15, 2018 of complications from pneumonia at a hospital in Santa Monica, California at the age of 74.

All content from Kiddle encyclopedia articles (including the article images and facts) can be freely used under Attribution-ShareAlike license, unless stated otherwise. Cite this article:
R. Lee Ermey Facts for Kids. Kiddle Encyclopedia.