Emporia is a city in and the county seat of Lyon County, Kansas, United States. As of the 2010 census, the city population was 24,916. Emporia lies between Topeka and Wichita at the intersection of U.S. Route 50 with Interstates 335 and 35 on the Kansas Turnpike. Emporia is also a college town, home to Emporia State University and Flint Hills Technical College. 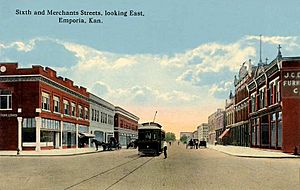 Located on upland prairie, Emporia was founded in 1857, drawing its name from ancient Carthage, a place known in history as a prosperous center of commerce. Emporia is particularly known for its newspaper, the Emporia Gazette, published in the first half of the 20th century by the legendary newspaperman William Allen White. The paper became the widely perceived model of excellence in small-town journalism.

The first railroad was extended to Emporia in 1869.

In 1953, Emporia was the site of the first Veterans Day observance in the United States. At the urging of local shoe cobbler Alvin J. King, U.S. Representative Edward Rees introduced legislation in The United States Congress to rename Armistice Day as Veterans Day. President Dwight D. Eisenhower signed the bill into law on October 8, 1954.

On Sunday, March 6, 1988 a heavily armed gunman walked into the Calvary Baptist Church during services and opened fire. The 29-year-old gunman, Cheunphon Ji, had no particular target, killing one person and injuring four others.

Emporia is the principal city of the Emporia Micropolitan Statistical Area, which includes all of Lyon and Chase counties.

There were 9,812 households of which 31.1% had children under the age of 18 living with them, 40.0% were married couples living together, 5.3% had a male householder with no wife present, 11.5% had a female householder with no husband present, and 43.2% were non-families. 32.1% of all households were made up of individuals, and 9.0% had someone living alone who was 65 years of age or older. The average household size was 2.39, and the average family size was 3.08.

The city is served by the Emporia Municipal Airport as well as the Lyon County Area Transportation (LCAT) municipal bus system. The city once had an Amtrak stop and was served by the east and westbound Southwest Chiefs daily. The station was eliminated in 1997 two years before a fire destroyed the station, but local efforts in 2014 are trying to bring back that station.

Emporia is served by the following highways. 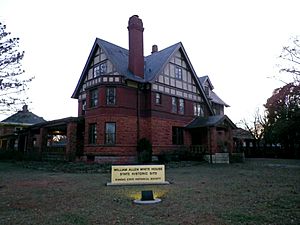 Emporia has 14 structures on the National Register of Historic Places. They are the Old Emporia Public Library, the Finney (Warren Wesley) House, the Granada Theater (also known as the Fox Theater), the Harris-Borman House, the Howe (Richard) House, the Keebler-Stone House, the Kress Building, the Mason (Walt) House, the Anderson Carnegie Memorial Library, the Plumb (Mrs. Preston B.) House, the Soden's Grove Bridge, the Soden (Hallie B.) House, the William Allen White House (also known as Red Rocks), and the Col. Harrison C. and Susan Cross House. There is also an authentic one-room school house located on the Emporia State University campus (near Merchant Street) that is available for tours through the ESU Teachers College and The National Teachers Hall of Fame.

At the Emporia service area of the Kansas Turnpike is a Kansas Historical Marker named Emporia - Home of William Allen White.

All content from Kiddle encyclopedia articles (including the article images and facts) can be freely used under Attribution-ShareAlike license, unless stated otherwise. Cite this article:
Emporia, Kansas Facts for Kids. Kiddle Encyclopedia.