Great Flood of 1951 facts for kids 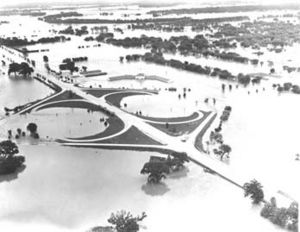 In mid-July 1951, heavy rains led to a great rise of water in the Kansas River, Missouri River, and other surrounding areas of the central United States. Flooding occurred in the Kansas, Neosho, Marais Des Cygnes, and Verdigris river basins. The damage in June and July 1951 across eastern Kansas and Missouri exceeded $935 million (equivalent to $7.67 billion in 2018). The flooding killed 17 people and displaced 518,000 more.

The 1951 flood in Kansas began in May with the flood of the Big Creek, (a tributary of the Smoky Hill River) in Hays after eleven inches of rain in two hours. The creek overflowed, flooding Hays (the location of Fort Hays State University) to a depth of four feet in most locations inhabited by the coeds on campus, necessitating a midnight flight from the barracks (by families of the G.I. Bill) and dorms to the Stadium's third floor, which was still dry. All records at the college were ruined and no graduation was held on the appointed date of May 23. Graduates were mailed their diplomas a month later.

At the time there were no warning sirens in Hays. Two police officers drove up and down the low riding streets with their sirens blaring shouting to evacuate. They are credited with saving many lives.

The flooding continued into June 1951 with heavy rains that month. The flooding reached its worst stages when between 8 and 16 inches (410 mm) fell on the region between July 9 and July 13. The flood levels reached their highest point since the Great Flood of 1844 and Flood of 1903. July 13 experienced the single greatest levels of flood and led to the greatest amount of destruction by flood experienced in the Midwest as of that date.

The actual flood-levels are not accurately known for the Kansas River, as the water crested above all official flood gauges. However, between Manhattan and Bonner Springs flood levels were between 4 feet (1.2 m) and 6 feet (1.8 m) above all previous records. The Marais Des Cygnes River, Verdigris River, and Neosho River crested more than 9 feet (2.7 m) above previous records.

The heaviest initial damage by the flood crest was to Manhattan and Ft. Riley. Barracks at the Fort were destroyed, and in Manhattan the downtown business district was deluged under 8 feet (2.4 m) of water and two people were killed. Following this, Topeka and Lawrence were also damaged by the same crest. Approximately 24,000 people were evacuated from Topeka.

In Kansas City, the flood began running over the top of the levees protecting the Argentine and Armourdale areas, resulting in the evacuation of 15,000 people. Houses in Armourdale had water all the way to their roofs. The flood devastated the Kansas City Stockyards in the West Bottoms at the confluence of the Kansas and Missouri Rivers. The Stockyards would never fully recover. The flood destroyed the TWA overhaul base at Fairfax Airport in Kansas City, Kansas prompting the city of Kansas City, Missouri, to relocate TWA to a new airport in Platte County, Missouri that was to become Kansas City International Airport.

On July 17, President Harry Truman toured the damage by airplane, as far west as Manhattan, and declared the disaster "one of the worst this country has ever suffered from water".

Following this flood a series of levees and reservoirs were constructed throughout eastern Kansas. This new network of flood control structures helped to prevent widespread damage when the region was hit later by the Great Flood of 1993.

Prior to the flood there were five federal flood control dams in operation in the Kansas River basin:

Several others had been planned by the United States Army Corps of Engineers and the Bureau of Reclamation, both authorized by the Flood Control Act of 1944.

Since then, many dams have been constructed so that a total of eighteen dams now control the flow of the Kansas River, such as Webster Dam and Kirwin Dam on tributaries of the Solomon River in Kansas. Many other reservoirs and levees were built in other nearby basins which were also built as part of the response to this flood (such as in the Osage River basin above the Lake of the Ozarks).

In North Lawrence there is a building shaped like a teepee. A mark on the side of the building indicates the water was 7 feet high around the building.

In 2011 a painting of the flood "Flood Disaster" by Thomas Hart Benton was sold for $1.9 million in an auction at Sotheby's in New York City. Benton had made the painting at the time of the flood and sent lithographs to every member of Congress to support a flood appropriations bill.

Comparison to other big floods 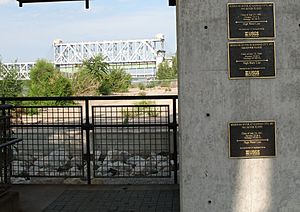 Channeling and levee construction have altered how the floods have hit various areas along the Missouri River. Here is a comparison of the three big floods since the early 19th century.

All content from Kiddle encyclopedia articles (including the article images and facts) can be freely used under Attribution-ShareAlike license, unless stated otherwise. Cite this article:
Great Flood of 1951 Facts for Kids. Kiddle Encyclopedia.