De Soto began in the spring of 1857, named for sixteenth-century Spanish explorer, Hernando De Soto. In 1858, John Possum, a Shawnee Indian, and Hattie Possum sold 80 acres to John F. Legate, S. Todd and Stratton and Williams for $1,200. The next sale was 80 acres to the De Soto Town Company in July 1861 for $1,176. Major James B. Abbott is remembered as one of the town's pioneer landowners and the builder of Abbot Hall. Today, Abbot Hall is one of two town museums.

With the construction of the 9,080 acre Sunflower Army Ammunition Plant south of De Soto, De Soto's population boomed in the early 1940s during WWII. In May 1943, The Kansas City Star article reported "a town rapidly growing, with a population increase from 400 to 1,000 persons in under a year". This sudden overflow in population put a great strain on housing and other resources in the city; however, many original residents prospered during this time, buying property and starting new businesses. Production flowed steadily at the Sunflower Army Ammunition Plant until the plant went on standby in March 1948, with small scale production following shortly after until its closure in 1993. 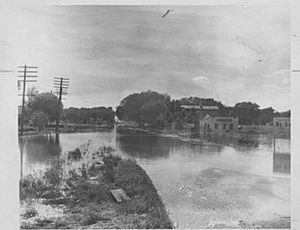 In mid-July 1951, heavy rains led to a great rise of water in the Kansas River and other surrounding areas of the central United States, known as the Great Flood of 1951. De Soto, being along the Kansas River, was severely damaged. The river crest at De Soto was recorded at 24.87 feet (7.58 m). Most of the downtown area was completely flooded, with over 2 feet of standing water in some places.

After the 2008 Recession came to an end, growth in De Soto has steadily picked up, with new commercial development in the K-10 Business District, an expansion of a major food production and medicine testing facilities and two new large 144-unit apartment complexes expected to be completed by 2018.

Lexington Lake Park is under construction and is expected to open just west of De Soto by mid-2017. When completed this park will be the third-largest park in Johnson County.

Arbor Ridge subdivision is a housing development which will enter phase 2 in 2017, allowing construction of 46, two-story housing units.

There were 2,007 households of which 41.5% had children under the age of 18 living with them, 60.4% were married couples living together, 10.5% had a female householder with no husband present, 5.0% had a male householder with no wife present, and 24.1% were non-families. 19.0% of all households were made up of individuals and 6.3% had someone living alone who was 65 years of age or older. The average household size was 2.83 and the average family size was 3.25.

There were 1,642 households out of which 41.7% had children under the age of 18 living with them, 62.1% were married couples living together, 8.6% had a female householder with no husband present, and 24.1% were non-families. 21.3% of all households were made up of individuals and 7.4% had someone living alone who was 65 years of age or older. The average household size was 2.78 and the average family size was 3.23.

Between 1999 and 2000, a barn that had originally been built in the 1880s was moved piece by piece from a farmstead and placed on the Zimmerman farm at the northwest corner of the Kill Creek Road and K-10 interchange. The barn was historically called the White-Waitmann barn but after its erection in 2000, by contractors and community volunteers, it also became known as the Zimmerman barn. The barn was not only a piece of American history, but it became well known throughout the community because the owner, Darrel Zimmerman, allows the public to pay a fee and use the barn for events such as weddings, graduations, and other meetings. However, a fierce storm demolished the barn in May 2010. The barn was rebuilt in 2013, after it was determined that Zimmerman could not locate another historic-looking barn to move on the location.

De Soto is home to the Riverfest Park and Amphitheater, first opened in 2006. This park serves as De Soto's main venue for concerts and festivals. The venue has undergone renovations to add a playground, gravel parking lot and riverfront benches. Plans to add permanent parking, a stage and Recreational vehicle plaza are in the works.

The city has been the host of the annual De Soto Days Festival. The fair begins on the Thursday before Labor Day and runs until the holiday itself, making it the third longest Labor Day festival in the County. The fair has booths and three stages, entertaining 15,000 patrons annually on the 5 operating days.

Winesong at Riverfest is a major cultural attraction for the Kansas City area. The event, which began in 2012, is a wine festival hosted by the De Soto Rotary Club annually in early June. The event features wineries from the Midwest, and includes samples, appetizers, music and art competitions. Annual attendance is 1,000.

Cookin' on the Kaw

Cookin' on the Kaw is an annual blues and barbecue event at Riverfest Park hosted by the De Soto Chamber of Commerce. The event has several booths, one stage, a BBQ contest, beauty contests and a variety of other entertainment which attracts between 3,000 and 7,000 patrons annually on the 2 operating days.

De Soto is served directly by one state highway and four county roads:

All content from Kiddle encyclopedia articles (including the article images and facts) can be freely used under Attribution-ShareAlike license, unless stated otherwise. Cite this article:
De Soto, Kansas Facts for Kids. Kiddle Encyclopedia.