Leavenworth County (county code LV) is a county located in the U.S. state of Kansas. As of the 2010 census, the county population was 76,227. Its county seat and most populous city is Leavenworth.

In 1854, the Kansas Territory was organized, then in 1861 Kansas became the 34th U.S. state. In 1855, Leavenworth County was established, and is among the first 33 counties, which were formed by the first territorial government. It was named, as was its county seat, after Henry Leavenworth, an officer in the War of 1812.

Leavenworth County had the first Kansas State University extension agent in the State.

This county's watershed connects with both the Kansas River basin on the south via Stranger Creek and has a Missouri River port city to the east. 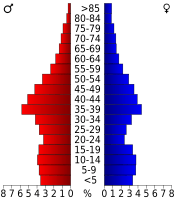 The county is a part of the Kansas City, MO-KS Metropolitan Statistical Area.

There were 23,071 households out of which 38.9% had children under the age of 18 living with them, 61.4% were married couples living together, 9.5% had a female householder with no husband present, and 25.4% were non-families. 21.7% of all households were made up of individuals and 8.1% had someone living alone who was 65 years of age or older. The average household size was 2.69 and the average family size was 3.15.

Leavenworth County is divided into ten townships. The cities of Lansing and Leavenworth are considered governmentally independent and are excluded from the census figures for the townships. In the following table, the population center is the largest city (or cities) included in that township's population total, if it is of a significant size.

All content from Kiddle encyclopedia articles (including the article images and facts) can be freely used under Attribution-ShareAlike license, unless stated otherwise. Cite this article:
Leavenworth County, Kansas Facts for Kids. Kiddle Encyclopedia.